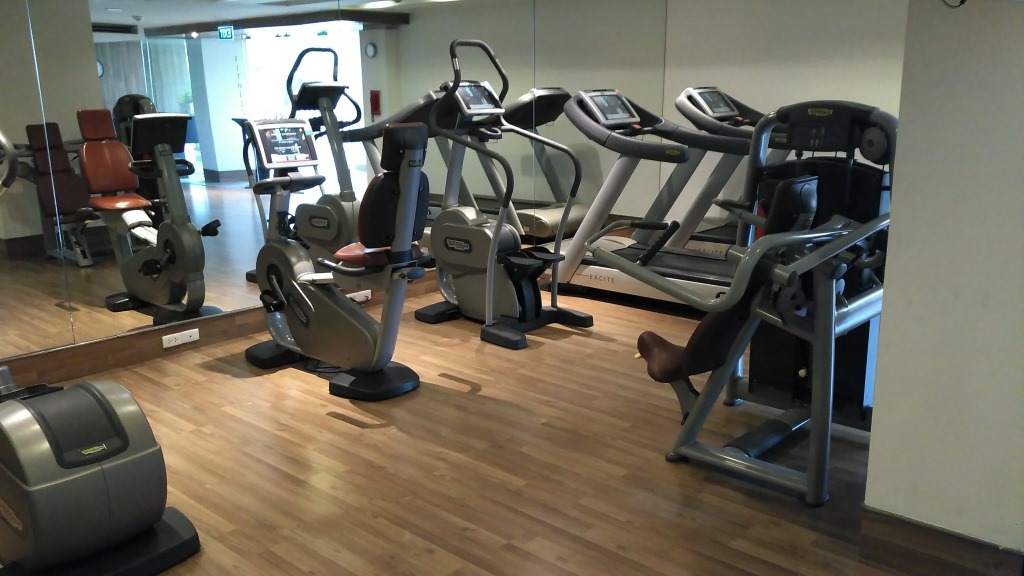 The gym is located on the second floor of the main resort building. Entrance is 24/7 with your room key and there is no check-in desk/attendant. When I visited (March 2017), it was under construction and part of the space was blocked off with a sheet.

There are mirrors completely covering 2 of 4 walls, so the pictures add a bit of a Circus Fun House effect and make the space look larger than it is.

Despite the rather small space, they had a surprising amount of machines including: Their choices of machines are a bit perplexing. My first thought was, if you’ve only got space for 5 or 6 machines, why would you make 3 of them for legs? I’d have just put a leg press in there and called it a day–no need for the leg extension and separate curl machine. By doing that, you could free up some space for more freeweights or a cable crossover.

Cardio equipment consisted of 1 treadmill, 1 elliptical, 1 stairclimber, and 1 recumbent bike. They each have their own TV screen, were fairly new, and in great condition. Not much to see for freeweights. Dumbbells up to 25kg (55 lbs.) plus a rack of fixed-weight barbells up to 50lbs (oddly in pounds instead of kg). A couple of medicine balls and other lightweight dumbbells rounded out the freeweight section. Water bottles and towels. They had some music as well, but I had my headphones in the entire time.

The pool and spa were in separate areas of the compound so nowhere near gym. The pool was very nice, clean, and large. We spent a good amount of time out there doing laps and splashing around. The hotel was at low capacity so we had the place to ourselves most of the time. The Spa (called Parvati), I must say, was on another level. Unfortunately I didn’t think to bring my camera, but believe me when I say that it was the best I have ever been to. Check out their site here for some information and pictures. I’m a huge fan of Thai massages, and we each booked 90 minute sessions for cheap (can’t recall the price, but it was under $50 which is insane). Again, we had the place to ourselves and were shown to a private spa building where we had a changing room, two tables, and a storage for our stuff. It was a really wonderful experience and I wish we had time to do another treatment before leaving!

The gym was so-so. It had poor lighting, weird music, and was half blocked off by a sheet. Otherwise, the atmosphere at the pool and spa were superb.

As I mention above, the gym was alright but not great. Perfectly adequate for the one workout I did, but if I were staying for a week I would have been disappointed. The spa and pool were remarkable and I would have loved to spend more time there!