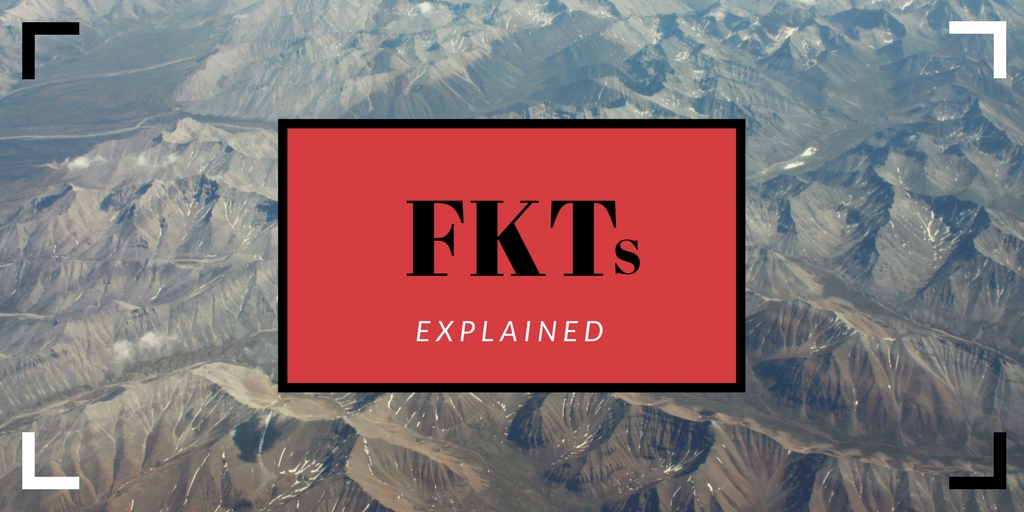 Update: In 2018 the owners of FKT’s proboard site launched FastestKnownTime.com, which is now the go-to place for all things FKT. It’s much better organized and more user-friendly, so check it out!

Fastest Known Time attempts (also known as FKTs) are, in the simplest terms, speed records for trails and established routes. Instead of a typical race with formal organization, aid stations, and spectators, FKTs are usually performed with little recognition and support.  They have become quite popular among endurance athletes in recent years as competition increases among athletes who are looking to differentiate themselves and push their limits. FKTs and athletes gain quite a bit of notoriety within the endurance community and, occasionally, the mainstream media for their accomplishments. In 2017 alone, FKTs were set for the fastest ascent of Mt. Everest as well as the quickest thru-hike of the Appalachian Trail.  While FKTs have caused a bit of controversy – mainly with verification of speed claims and the potential overuse of trails – the collective opinion toward FKTs is that they provide a positive alternative source for competition on trails that are too long or off-limits for traditional races.

Although there is no official sanctioned body that is the keeper of official records, the best resource for finding and contributing FKTs is the forum at the Fastest Known Time website run by ultramarathoner Peter Bakwin. There, the world is broken down into regions and then further into countries, states, and eventually to trails themselves. Within these forums, threads are created for specific routes and trails where athletes post their triumphs, reports, and questions. When a new FKT is entered, e.g., someone beat the previous speed record of the route, the claim is verified and stands until it is broken by someone else. Within the broad definition of an FKT, there are three types that are currently considered: supported, self-supported, and unsupported.

According to the FKT website, the definition for each type of FKT is as follows:

Supported means you have a dedicated support team that meets you along the way to supply whatever you need. This generally allows for the fastest, lightest trips, and for an element of camaraderie and safety, since someone knows about where you are at all times.

Self-supported means that you don’t carry everything you need from the start, but you don’t have dedicated, prearranged people helping you. This is commonly done a couple different ways: You might put out stashes of supplies for yourself prior to the trip, or you might just use what’s out there, such as stores, begging from other trail users, etc. Long-distance backpackers are typically self-supported, since they resupply by mail drop or in stores. A subset of self-supported style has become the standard for some of the longer thru-hiking routes, such as the AT and PCT.

Unsupported means you have no external support of any kind. Typically, this means that you must carry all your supplies right from the start, except any water that can be obtained along the way from natural sources. For most people, carrying enough food for more than a few days to one week will be prohibitive. Unsupported also means unaccompanied (no pacers).

To summarize, the type of FKT is based on how much support the athlete has during their attempt. It stands to reason that the time for completing a supported FKT will be faster than unsupported because they don’t have to carry their supplies. There are intricacies of each type that are argued, sometimes vehemently, one way or the other – such as whether or not a team of people can be considered unsupported – but those should be worked out ahead of time by communicating the specifics of the FKT attempt.

Because there is no official sanctioning body for verifying FKTs, determining the veracity of each case is left mostly to the community. However, in order to claim an FKT several pieces of information are both required and helpful.

The main process for easy verification involves the submission of tracking data, photos, and the tried-and-true trip report. More information about the types of acceptable tracking is available on the FKT site,  but the gist is that simply providing a GPS watch data (GPX, KML, etc.) and saying you did an FKT is not enough evidence to prove it because there is insufficient evidence to corroborate the story (and it’s easier than you think to fake GPS data).

Rather, athletes must provide data from a satellite tracker such as the Garmin InReach or SPOT, which have worldwide tracking and real-time position monitoring capabilities. A satellite tracker, while required, is still not adequate evidence to prove an FKT. In addition to this, photos taken along the route with metadata (date and time stamp) enabled can help prove where you were at specific times. Finally, a trip report with a daily log of mileage and other observations can help add more credibility to your claim.

Again, no single data method is sufficient for proving an FKT. It’s the combination of several supporting sources that lead to acceptance of a claim. The most important thing in all FKT attempts is to be open and honest with your intent, situation, and assumptions.

There are many reasons why someone might pursue an FKT. As Nick Hollon writes in an article on the subject, chasing FKTs  “affords us the ability to race where we want, when we want.” He also outlines several other factors that make FKT attempts appealing:

Low cost. Entry fees for races can run anywhere from $25 to $3,000-plus. To do an FKT, sometimes all you need is a permit, and sometimes you need nothing. It can be infinitely more cost effective to pursue FKTs over races.

Freedom. Large races, especially ultramarathons, often have strict rules about the route, pacing, and required gear. For FKTs, you’re on the honor system (aside from the verification methods discussed) and the onus is on the athlete to act responsibly and safely. What’s more, the options for FKTs are essentially endless, as nearly any established route can be used for an FKT attempt.

Publicity. While this may not affect many athletes, there are indeed some who are trying to make a name for themselves in the endurance arena. As Hollon says, “A well-publicized FKT can now garnish the same (if not more) fame than winning a competitive ultra.” Instead of making it on the podium of Western States or a similarly famous race to gain recognition, competitors can use FKTs in combination with social media to get their story out and have their time in the spotlight.

How to Complete an FKT Attempt

If you’ve decided to try for an FKT, here are the steps you should follow in order to make the planning and verification go as smoothly as possible:

Decide when, where, and how (supported, self-supported, unsupported) you will do your FKT.

Research what the current FKT is for your particular route, if any, on the FKT website and elsewhere online.

Announce your intent to attempt an FKT publicly and ahead of time. Ideally, this is done on the FKT website within the appropriate forum. Be open and honest about any deviations or assumptions you are making during your attempt.

When you finish, write a detailed trip report and submit to the FKT site along with your satellite tracking and other data (if applicable) for verification. Once your FKT is accepted, you will hold the unofficial title until it is broken.

FKTs are a growing trend among extreme athletes nowadays, and for good reason. They allow people to push themselves in different ways without the constraints or crowds normally associated with large-scale races. They can be a great way to gain some recognition for athletic achievement as well as a sense of pride for personal accomplishment. No matter the catalyst, the most crucial part of a successful FKT is the care taken in verifying your claim. After all, as they say on the FKT site, “If no one believes you, what’s the point of claiming an FKT?”