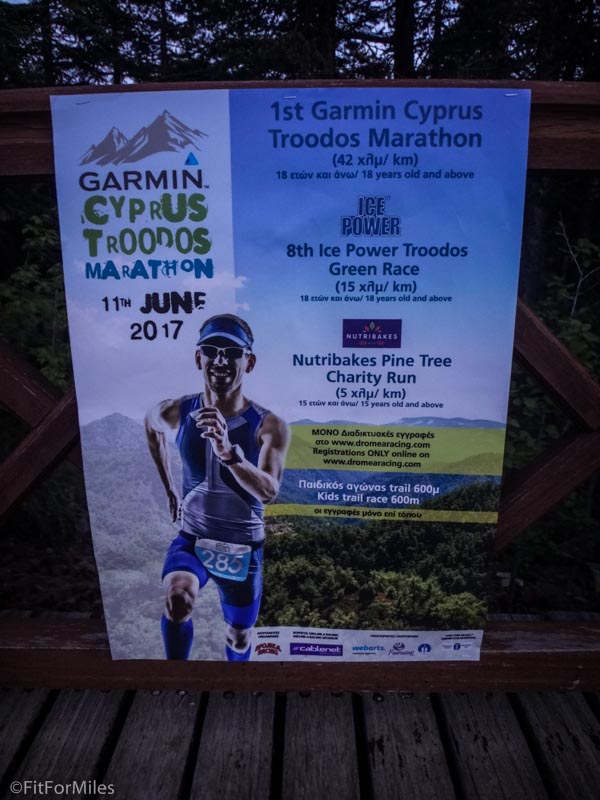 Registration was done online through the DroMeA Racing website. Info and announcements were made on their Facebook Event. Other races included a 15k and 5k race in addition to the Marathon.

Registration cost 40€ with a 10€ discount if you registered early (by May 30th).

Pre-Race: The Day Before

This race took place in the Troodos Mountains, the other large mountain range in Cyprus other than the Kyrenia Range (where the Two Castles Ultra takes place). The race started and finished at the appropriately-named Troodos Square, which has exactly one hotel within just a few feet of the start line: the Troodos Hotel. Seeing a pattern here?

Many people chose to stay overnight at the Troodos Hotel the night before, as the race was starting at 5:30am (although just as many did not, since just about anywhere on the island is within an hour’s drive). We chose to stay overnight at the hotel and booked a month or so in advance, as it tends to fill up quickly. The prices are about $50/night and the accommodation is mediocre at best, but you can’t beat the location.

We were just arriving back in Cyprus from a trip to Slovenia, and unfortunately my luggage was misplaced along the way. In it, I had all of my race clothes and my shoes, which was quite unfortunate. Luckily I had spares at home, but that required an extra hour plus of driving. It wasn’t terrible, just very frustrating since I had planned to run in my Altra Lone Peaks but instead needed to revert to my old Solomon Speedcross 3s which are being held together by superglue.

Despite all that, we arrived at the hotel at around 7pm and had just enough time to pick up our race packs, grab a quick meal at the restaurant, and hit the sack.

I headed out to the Square to check out the start line. At 5:00, I was the only one there! Then the organizers rolled in and finished their setup. Almost go-time! This was my first run using my new (to me) Suunto Ambit3 Peak watch. Still figuring out the basics. I was familiar with part of this course, because it follows a lot of the Buff Troodos 25k race that I ran last year as my second-ever trail run. It kicked my ass last time because I was not expecting there to be such long descents (and subsequent ascents) in the valleys. Sure enough, I ran too hard on the downhills during that race and killed my legs for the uphill. This time, I’d be doing the same up-and-down in the valley with an extra ascent to the highest point in Cyprus: Mount Olympos.

Here is the official course information: So, how did the race go?

Here is the course and my stats (click through to view all data on Strava):


The course was just as difficult as I remember from last year. The beginning tricks you because it’s easy rolling hills, a bit of a bottleneck right off the bat, and then a long series of downhills.

From the splits, it’s easy to see that the first half of the race was downhill. This was great at the time, but I knew it was going to be a long journey back up.

Most of the first 13 miles was through the forest and along wide jeep tracks like this: There were a few uphills, but it was mostly downhill. As it was mainly on known tracks, it was marked well..Maybe too well! I finally reached the first checkpoint to find some goodies awaiting. One thing I hadn’t seen before was this homemade peanut and almond butter. It really hit the spot and was exactly what I wanted: I’m kicking myself for not buying a jar of it after the race! They also had chips, watermelon, bananas, and dates. This was a simple and highly effective checkpoint. Each one had the same items, and at each one I took some peanut butter, some Powerade, and half a banana.

At about the 20km mark (12.4mi) is where it started turning back uphill to get us out of the valley. The route hugs the mountainside and cris-crosses a small brook a half-dozen times along the way. Long uphills meant it was time to walk. I spent most of the second half of the race walking all the hills, in fact (and taking selfies). No shame. I ran with a buddy for most of the second half, and he was a good pacer since we both like to walk. I was doing fine on water and nutrition, but my quads and hip flexors were shot after 30k. I honestly had not been training very hard since the Two Castles Ultra the month before, and my lack of mountain training was really starting to show when I began falling apart.

On the last stretch before reaching the top of Mount Olympos, we were going the opposite direction on the same trail as the 15k runners. I was jealous that they all looked so fresh and were bounding about the trail when I had my hands on my knees pushing every step of the way. Several of them stopped to ask me how far they were from the finish line. Although tempted to tell them “35k” (how far we had gone thus far), I grumbled that they were a short 1.5k from their finish. Must be nice!

As I was coming around a corner, I saw the funniest thing I had ever seen on the trail: a man running with a double-wide stroller on the trail. This part was particularly rocky and loose, and this dude was bouncing this thing up and over boulders. I wish I had been quick enough with the camera to snap a picture, but I was in such disbelief that I didn’t react in time. Both he and the kids seemed to be having a good time, so I guess I can’t hate on him too much. I didn’t waste too much time up there, but I did take a few seconds to drink in the view. It never gets old!

One last glimpse at the top, and I was off back down the mountain. The next bit was super rocky and loose. With my legs being in such tough shape, I had to take it pretty slow on this section. As a matter of fact, we were running down the ski slope of Cyprus’ one-and-only ski resort, blowing right past the lift along the way.

At this point, we still had another 6 miles to go. Luckily the rest of the route was rather mild and pretty flat, like this: But it still had some nice views: One thing that was really starting to bother me was my shoes. As I had mentioned, I’ve been training in my Altras and loving them, but since they were currently in a Lufthansa cargo hold somewhere over the Mediterranean Sea, I was in my Solomon Speedcross 3s. These are a fine shoe, but they were beat to hell with barely any tread or cushioning remaining. That meant every time I stepped on a sharp stone (which was often), I would yelp and shed a tear. Ok, it wasn’t quite that bad, but it definitely wore on me as the day went on. For the rest of the race there weren’t many sharp rocks to step on, so I was in fine shape.

Rounding one of the final corners, there was a photographer taking some pics of everyone who passed through:

The finish line was just around the corner, and I unceremoniously crossed it and received my medal. It felt damn good to be done! The temperature had been creeping up all morning and it was getting in the high 80s by then. It was a good time to be done.

Most of the sponsors were still there when I finished, so I was able to get some fruit, water, and some strange rose-water stuff before heading off to change. The official results of the race are posted on DroMeA’s Race Results page HERE.

I’ll spare you the anticipation and tell you upfront that I didn’t win the race (as happened in my fluke 50k). In fact, not even close–I was #32 of 50, which I guess you could say is near the top of the lower half. As with the Two Castles Ultra, there were a ton of very strong runners in attendance and I didn’t have the luxury of there being a longer race that most of them were running instead of mine!

I really don’t care about placing or finishing in any set amount of time, but I do like to look at the numbers for fun. I finished in 5:53. The winner crossed the finish line in 4:05 and is 50 years old. That’s a faster finish than my almost-flat road marathon time! What a boss. The guy who came in second, just 10 minutes later? 49 years old. It just goes to show that trailrunning isn’t a young-buck-only sport–the golden years are later in life!

Despite the bit of undertraining and the intense heat, I had a fantastic time at this race. It was superbly run by DroMeA with excellent communication, a nice runner’s package, generous sponsors, and great choices at the checkpoints.

As with the Two Castles Ultra, I had a strict policy going in that I would hang in the back, take my time, and stick to my nutrition plan. That worked out pretty flawlessly yet again, although I did take as much of the natural peanut butter as I could at the aid stations since it was delicious and something I would normally eat anyway.

This race was great practice for the upcoming Buff Troodos Ultra in October and I just wish I would be here for the second running of this course next year! Despite that, I had a lot of fun and always look forward to races put on by this club.