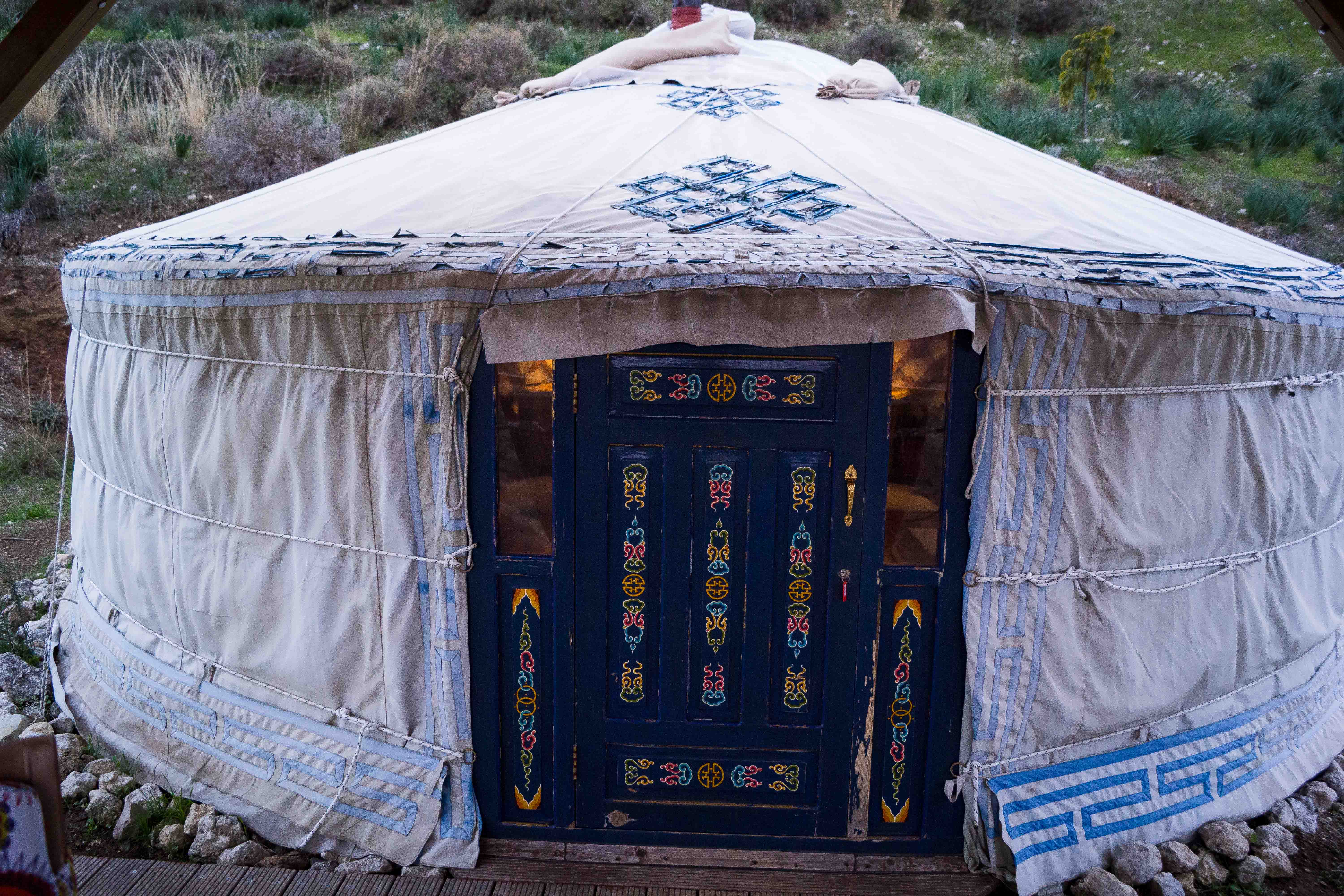 It was a long weekend here in Cyprus, and we decided to spend the extra time exploring Paphos and surrounding villages. As part of this, I cashed in a Christmas gift to spend two nights in a real Mongolian Yurt–something I had only seen on TV (e.g. Marco Polo on Netflix). It ended up being one of the coolest and most unique experiences we’ve had in Cyprus!

The yurts are located in the village if Simou, about a 2-hour drive from Nicosia. Pawel, the owner of Yurts in Cyprus, greeted us warmly and showed us around his 2.5 acre compound, which consists of 3 yurts (which are actually traditional ‘gers’, e.g. common space tents) all of which have their own balcony, bathroom, and stove. Each yurt is hand-painted and shipped directly from Mongolia. I was immediately amazed at how intricate and spacious they are inside. With 290 sqft of floor space and over 8ft of headroom, there is plenty of space to move around and it never feels crowded.

We stayed in the Nasu yurt, which had a beautiful view overlooking vineyards and valleys. Inside, there is a large bed, seating area, table, stove, and plenty of storage. While the bathroom wasn’t inside the yurt (gross), it was just a few steps away and included plenty of hot water for showering and washing. I was surprised to find out that the yurts have electricity as well, which is powered by solar panels and batteries on the property.

Each yurt comes with a stove and plenty of wood to keep a crackling fire going all night. Although there was no snow, the temperatures did drop to the low 40s at night and so without a lot of insulation some extra heating is required. We found the bed to be incredibly comfortable and the fire kept us toasty all night.

Pawel has been running the place for three years and has taken great care to make the establishment sustainable, ethical, and as natural as possible. He has planted dozens of trees, hosts yoga and music events, and does what he can to give back to the community. It’s a really great business model. Not only is the place pet-friendly, but he has a tribe of three friendly cats and a dog who run the grounds.

We settled in and opened up a bottle of good Cypriot wine to enjoy a beautiful sunset on the balcony. For dinner we ventured to Aphrodite’s Rock Brewery, another one of our favorite spots in the area and Cyprus’ first microbrewery! Their London Porter is a favorite. The next day we headed to the Akamas peninsula for an 8km (5 mi) hike around the Baths of Aprodite following its Nature Trail. The difficulty was moderate, so not too taxing of an endeavor and it was a nice sunny day with temperatures in the 60s (F). The only disruption was a herd of goats who were obviously heading for the baths themselves! The coastal views from the top were fantastic, although it was a bit difficult to figure out where, exactly, the “baths” were.

We stopped at the Baths of Aphrodite Restaurant (appropriately named) after finishing the hike for some much needed sustenance and another gorgeous viewpoint. On the way home the following day, we made one last stop at the Vasilikon Winery for a quick tasting. There, we tried three different varieties after walking around their grounds and checking out their wine museum. We left with a bottle of each (Dry White, Agios Onoufrios, and Methy Cabernet Sauvignon) — we need to stock up for future trips!

This was a really fun trip, and we didn’t even have to leave the island! Cyprus is small, but finding hidden gems like these keeps it interesting.