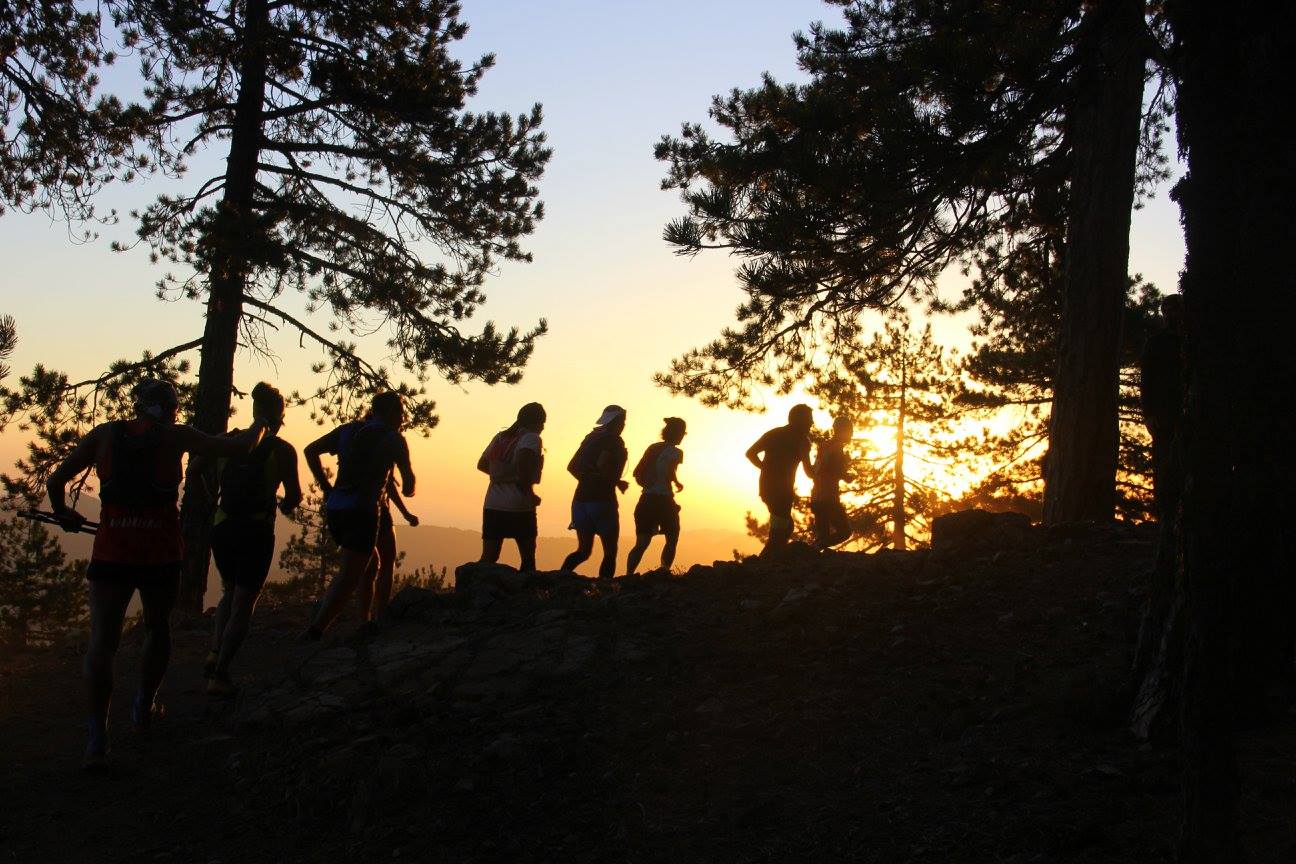 Yes, this was my longest and hardest training week of the cycle, and it ended with a crazy 32-mile/52km run on the course of my upcoming race, the Troodos Mountain Ultra.

Part of this session was a training run put together by the race organizers. They are doing runs on three consecutive weekends in September to cover the three loops of the 80k Troodos Ultra route. According to my race plan, I needed to do a maximum-effort long run this week in order to start drawing down my mileage until race day, and so I decided to do a second loop of the race course in addition to the one scheduled for the day. Man oh man, was it a tough day.

The first loop was quite enjoyable. There were about 30 others participating in the training run, so the mood was light and festive. I got to watch the sun rise from the trail, chat with friends I haven’t seen for most of the summer, and enjoy the cool morning temperatures.

On a particularly rocky and loose section, I lost my footing and ended up on my ass. No big deal, as it happens quite often. As I continue running, I notice that my thighs are starting to stick and rub during my stride. I thought that maybe the Vaseline I used that morning was having some weird reaction to something I rubbed against, and I tried to forget about it. Soon enough, it was starting to get more and more sticky and I couldn’t figure out what was going on. Finally, I reached into the pocket on the back of my shorts for one of two gels I had stashed away, only to realize that they had both burst open during my fall and were leaking all over my shorts, thus causing the sticky mess between my legs. At this point we were only about 3 miles into the 16-mile loop, so I wasn’t in a position to go back–not that I had anything to change into anyway! I made due by spitting water onto my hand and Buff and trying to rub off the goo as best I could, but it didn’t work well. I ran this way for the entire day.

The rest of the run was just as scenic and enjoyable, albeit slightly more sticky. They had a small aid station set up for us at about the 10mile mark, which was really great, and I used some of the water there to wash my shorts off as best I could. Another 6 miles on the trail, and I was back at the parking lot (where all the loops start and finish) at around 11 am. Here’s the GPS data for the first loop:

After finishing the first loop I was feeling alright – definitely needed a break, but knew I could continue. I set up my DIY Aid Station, took a load off, had a snack, and tried to mentally prepare for what I know to be the hardest section of the trail.

As everyone else was taking off their shoes and waving goodbye, I was reapplying sunscreen and filling my pack with water and snacks. Before I knew it, I was back on the trail.

There’s no easy way to describe this section other than “exhausting”. Looking at the elevation profile, it’s easy to see why: For the first 4 miles, it’s fairly flat or slightly downhill. Then, over the course of the next 4 miles, you descend over 5,000 ft only to turn around and ascend that same altitude to get back to the start. It’s a real killer, and the second half is super slow-going on tired legs. I’m glad I had my new Black Diamond Distance Z poles with me, which helped get me up some of those inclines much easier. Still, it was no cake walk. In fact, this route nearly broke me. By the time I made it back to the parking lot, over 4.5 hours later, I was completely spent. All I was thinking was, “how will I ever manage to do ANOTHER 20 miles on top of this during the race?!”.

Living overseas, I often find out about new movies and TV shows much later than my U.S.-based compatriots. Luckily, though, Veronica noticed that the new season of Narcos was recently made available on Netflix and so we’ve been binge watching that all week. This is definitely one of my all-time favorite shows, and the theme song is great!

What a week! I kept a fairly high-volume schedule from Monday-Friday and then really kicked it into overdrive for the long run. As I’ve said over and over, it really kicked my ass. I’m going to have to dig deep on race day to be able to pull off an extra 20 miles in addition to what I did this weekend. I’m getting exhausted just thinking about it. I need a massage and a shot of whisky.