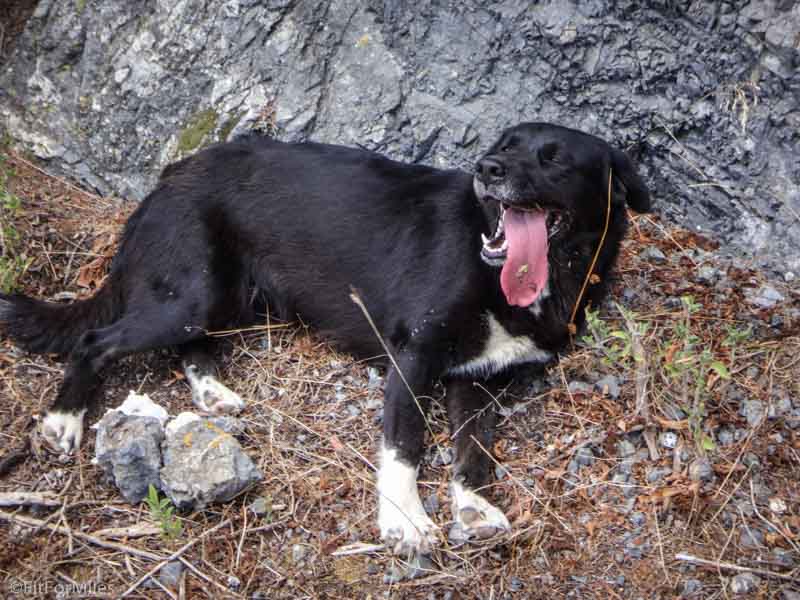 I nicknamed this run “The Hurtlocker: Alevkaya”. It had some pretty tough uphill sections and the heat and humidity was incredibly intense, even though I started at 6:30am. Despite that, I actually felt quite good throughout. I have felt far worse after completing shorter runs, so this is a good indication that my strength and stamina are improving, especially in the harsh weather conditions. Very motivating! At one point I stopped and forgot to restart my GPS, so the map and mileage are a bit skewed. Strava picked up the difference and marked it with a straight line to show where it started recording again, but I still lost a bit of mileage. The most interesting part of this run, though, was my crew: These guys came up to me as soon I stepped out of the car at the trailhead. They are likely strays looking for some food and attention, the former I had none of. I took off jogging with my headphones in, and when I stopped about 20 minutes later I turned around to see them still behind me! These guys followed me for 20 miles until finally succumbing to the heat and exhaustion, which was pretty amazing. This song is 5 years old, but I was recently reminded of it when we were at Airfield Music Festival in Romania last month, and a local rapper came on stage singing this song. I got a good chuckle out of it, but the biggest laugh comes from reading the YouTube comments. In the words of one user, “this is a good song to scare upper class white neighborhoods”. Enjoy!

This was one of my best training weeks yet! Not only did I feel great throughout most of the 23-mi long run, but it was also my highest mileage week ever (topping last week’s 50 miles, which was my previous highest). I changed things up a bit and did two double-sessions (Tues/Thurs) of a 6mi run in the morning and then a 5mi run in the afternoon (on the treadmill on incline) instead of doing shorter mileages over the entire week. Not sure if I’ll keep this schedule or not, as it required a good amount of changing up my diet in order to keep my energy levels up. I’ll try it for at least a couple more weeks and see how it goes. 8 weeks from race day!