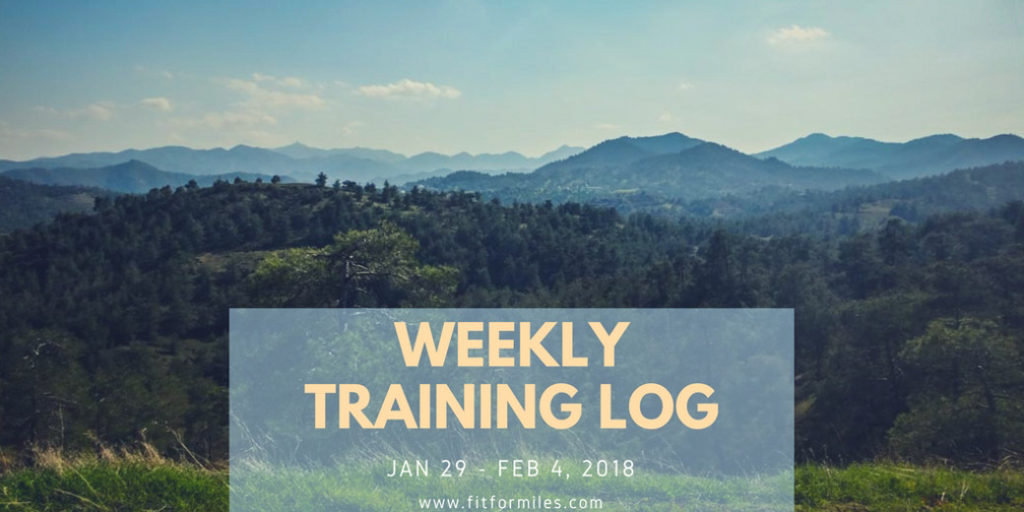 This weekend’s long run(s) was a nice “two-fer”. I took the day off from work on Friday and went to explore this village called Mitsero, which is known for having a huge pyrite mine and a “red lake” that has been stained by all the runoff and chemicals. Truth be told, I saw that a local running group is planning an event on the surrounding trails in May and since I’ll be on the Appalachian Trail at that time I didn’t want to miss out, so I went on my own.  Result: pretty damn cool!

I started by pulling the car off the side of the road on a dirt jeep track that was right along the route. Almost immediately after starting, I began to see relics of a bygone era of mining.

From there I had a rather steep climb on easy dirt roads, where I stopped to visit a small apiary along the way.

After a while, I reached the top of whatever hill/mountain I was on, and looking down the other side I saw that was in fact still some mining taking place: Not sure what kind of matter they were extracting, but there was indeed some activity. My route went right through their workspace, so I made a wide loop around to avoid confrontation. I made what seemed like a couple of loops around this mountaintop, spotting more old mining stuff along the way as well as a church. After all of that, I was ready to make my way to the red lake and see what that was all about. I was a good 7-8 miles away still (but only maybe 2 as the bird flies) so I zoned out for a bit.

When I did eventually make it to the lake, it was pretty impressive and creepy. As I approached, I noticed the dirt turned a bright red. The lake was pretty well fenced-off (a surprise here in Cyprus) which indicated that it’s probably quite unsafe, so I kept my distance. I ran up along the ledge (still keeping on the trail) and got a few nice shots of the whole lake: Neat spot. Not too long after, it was time to pull myself over for a snack. In addition to my usual gels and nuts, today I packed one of Manuka Sport’s recovery blend drink packets which mixes really well with water and tastes delicious while also packing 20 grams of protein! From there the trail was pretty much all undulating jeep track with the occasional vista or almond tree.

I didn’t see anyone out in the depths of the trails, but there were a few houses closer to where I parked the car. Some of them appeared to be extravagant hunting lodges, complete with spotting towers, full garages, and pools. I saw this and thought that it would have been heaven during my childhood: There was also the occasional junkyard. These places are so intriguing with the amount of crap that is so dutifully stored. And before much longer, I was back at the car and heading home. It was an interesting run with lots to see and some good terrain variety!

But wait, I said this was a two-fer! Yes indeed, the next morning I decided to head out yet again to the Besparmak Trail in the North for a little more practice. I’ll keep this description short, as it’s a route I’ve run and discussed several times. I started at about 7am and did an out-and-back route from St. Hilarion Castle to the Bellapais Abbey, totalling about 8.25mi each way. This section has long bouts of gradual uphill and downhill, making it exceptionally fast on the way out and ridiculously slow on the way back. It was good practice though, as my shins are now aching!  Anyway, here’s a few pics from the day: Lots of hills on this section! When I finished, I went to a nearby picnic area to have lunch and hang out for a few minutes before heading home. This place was in really terrible shape and completely trashed, which is so sad to see. Trash everywhere and stray cats and dogs rummaging through everything. It’s tough to watch. I wish I owned a garbage truck so I could back it up to these types of places (of which there are many in the North that are equally filthy) and clean them up once and for all. Sigh.

This week I wrote a blog post on TheTrek.co (and also published here) called Five Ultrarunning Skills I’ll Bring on The A.T. As I mention in the post, there is a lot of crossover between ultrarunning and backpacking, and I think that several good tips and habits I’ve picked up over the years will be applicable to my upcoming thru-hike. Take a look! Also, here are a couple of my more popular Instagram posts of the past 7 days:

Don’t get underwater during your training! Stave off the bonk by getting in calories and electrolytes early and often. @manukasport gels combine the best ingredients in an easy-to-down formula that isn’t the consistency of toothpaste (looking at you, Gu!?). Have a peek at manuskasportus.com and use code FF9898 for a 10% discount plus free shipping! . . . . . #manukasport #beefit #beedifferent #beeyourbest #manukahoney

Did you know that G-Eazy has a new album? Oh, it came out 3 months ago? Figures. Well, it’s new to me so I’ve had it on repeat this week. He has some really good stuff, and this is one of my favorites:

This was a great week of training and exploring. My next race is in two weeks so I’ll start to dial down my weekly mileage for a bit in preparation for that.

As usual, this post and my adventures are made possible by both ManukaSport and SNAP Nutrition. Please consider checking out their products and definitely use my discount codes for a break on the price and shipping (FF9898 for ManukaSport, brandon20 for SNAP).