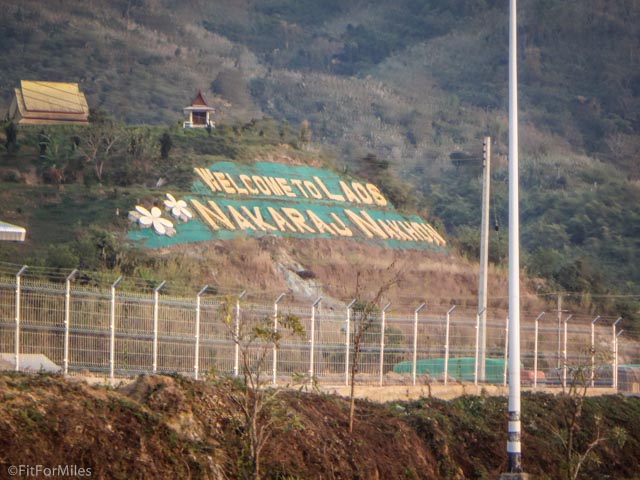 After leaving Bangkok, we headed north to cross the border into Laos for the next phase of our trip: The Gibbon Experience.

To get there we took an Uber to DMK, the smaller airport outside of the city that services most of the low-cost carriers. We had bought tickets on AirAsia for about $30 that would get us to Chiang Rai and as close to the border as we could get. Before boarding the plane, we stopped in the lounge for a few minutes knowing we wouldn’t get any kind of services on our flight. As was expected, the flight was delayed by about 40 minutes without notification, but we did eventually get to board. Our last flight was Hong Kong to Bangkok in Business Class, so the different seat was a bit of an adjustment. But for that price, I was happy to squeeze in! The flight was short so we arrived in Chiang Rai at about 2pm. I exchanged some cash to USD, knowing I would need it for the visa to Laos as I had read that they only take USD (turns out not to be the case, but USD is the best exchange rate). I generally despise exchanging money out of principal because the fees are outrageous, but I was pleasantly surprised to find that I was given the exact rate at the airport, which is unheard of (I was only exchanging $10 anyway). This is where the tuk-tuk/bus shuffle began that would envelop the next 6 hours of our time. First, we were working with very limited directions. The Gibbon Experience FAQ had a barebones description which basically says that from Chiang Rai you need to take a bus to Chiang Khong, cross the border, and a tuk tuk to the office in Houayxay. Seemed simple enough. However, knowing that there was likely more involved than just that, I did some research beforehand to figure out how/where to find the bus, the prices, etc.

We then got a cab to the bus station, which cost 180 THB ($5.30) and took about 20 minutes. At the bus station, we needed to hitch a ride to Chiang Khong.
From my previous research, I knew we needed to find a red bus, and sure enough there was one there with a sign saying it was going where we needed and cost only 65 THB ($1.91) each. It was leaving in half an hour, so we threw our bags on and went to buy a snack for the ride (more meat on sticks).
Once the bus was ready to leave we climbed aboard and hit the road. The bus was like an old and (more uncomfortable) school bus. No AC, hard seats, etc. However, the ride scenery was beautiful and a welcomed change from Bangkok.
Two hot and sweaty hours later, we got off the bus with another backpacking couple and what seemed to be a random stop on the side of the road (but the bus driver assured us it was where we needed to be to get to Laos). Once we got off, several tuk tuk were there waiting to take us to the border, about 10 minutes away. We paid them 50 THB ($1.47) each and soon  enough had arrived.
There, we had to show our passports and “departure card” that we had gotten on arrival to Thailand, which was stamped and taken (note: VERY important that you don’t lose this. We saw one backpacker who couldn’t find his and they wouldn’t let him through the border). On the other side of this building was a large bus which we had to take to the Laotian border at a cost of 25 ($0.74) thb each (usually only 20 but because we arrived ‘after hours’ [e.g. after 4pm] there’s an additional fee for ‘overtime’). The bus drove us across Friendship Bridge to Laos, where we then had to negotiate getting an arrival visa.
After about a 10 minute ride, the bus dropped us off right in front of a building that looked similar to the one we had just left. There, we needed to go through the rigamarole of getting a visa to Laos. First, there were two forms to fill out which had exactly the same information (including another arrival/departure card thing which I’ve only seen in these two countries). Of course, they also wanted photos to accompany the application, which we did not have. They were able to make copies of our passports instead (for an additional 40 THB [$1.18]/each fee).
We left our passports at that window and went to stand on another line at the next window. There, a guy would hold up passports and whomever it belonged to would come forward and pay their fee, then get to cross. It was very odd. We had a bit of a scare during this because we had exactly $70 for the visas (each is $35), but they pulled the same “after hours” nonsense on us as the bus stop and wanted an extra dollar each. Not a big deal for the price, but we didn’t have the cash! Luckily we scraped together some loose quarters and it ended up being enough. Whew. Note that some sources online say that they only take USD or Laotian Kip for the visas, but that is not the case. They will also take Thai Baht and Euro, although you’re at the mercy of whatever they say the exchange rate is. Your best bet is to get USD if you can (and exchange at the Chiang Rai airport for no fee!).
This whole process took about 30 minutes to complete, which I think is pretty quick considering the senseless process. There were only 15-20 of us there at the time, but from what I read they sometimes dump 200+ tourists off at this point and then it’s an absolute madhouse trying to pay your fee, push your way to the window, etc. I’m sure glad we didn’t have to wrestle with that.
On the other side of the border, guess what we had to do? Yep, pay another tuk tuk driver to take us into town. What a scam. For 100 THB ($3) each, we were piled 6 deep into the back of an extended-bed tuk tuk and rode for about 20 minutes before being dropped right outside our guest house.
To keep count, here are all the various fees and rides we had to pay for to get where we needed to be:
=1060 THB ($31.50).
Keep in mind that this is for two people, so we effectively got from Chiang Rai to Laos for $15 each. The price was incredibly low, but it was a pain to take 6 different kinds of transportation just to get where we needed to be. Every time we took a step, I had to also take out my wallet. I hate this kind of nickel-and-diming that is so common in this part of the world. I don’t think the $35 visa fee was too bad if we had planned to spend more time in the country, but for just a couple of days it was a bit steep. We checked into the Sabadee Guest House, which was fine and smooth. I forgot that I was supposed to pay on arrival and was unprepared to pay in USD ($20), so I had to pay a higher rate in local currency. Oh well. During check-in, the guy said that he could get us tickets for a bus back to Chiang Rai on the day we got back, which would take us direct without having to deal with all that tuk tuk nonsense. It was only about $12 each, and we couldn’t say ‘yes’ fast enough. After setting our stuff down, we went for a walk to pick up some last minute supplies like toilet paper and a flashlight, which were all fairly easy to find. This little village seems to be a jump off point for lots of different tours in Laos, so they know their audience. We then went to a little restaurant called “Bar How?” for dinner and had a pretty standard noodle, chicken, soup, and rice feast for cheap before heading back to the room.
We were pretty exhausted by the end of the day and ready to knock out for the night. The sheer number of vehicles we had stepped into over the previous 12 hours was dizzying, and were glad it was over with. Luckily, we were right where we needed to be for the next day’s adventure!