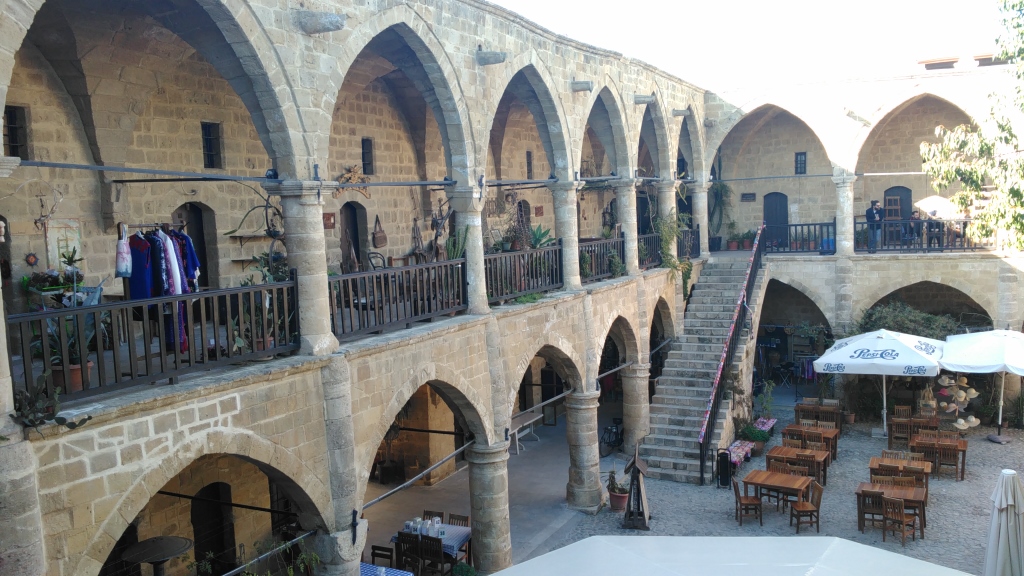 This weekend we had some friends in town and decided to show them the Turkish side of Nicosia (the what?!) and some of the great things to see up there. One of our favorite spots is the Büyük Han. Instead of re-hashing information that is widely available, take this short description from Wikipedia:

Büyük Han (English: Great Inn) is the largest caravansarai [roadside inn] on the island of Cyprus and is considered to be one of the finest buildings on the island. Located in the capital of Cyprus, it was built by the Ottomans in 1572, the year after they had seized Cyprus from the Venetians. In the centre of the open courtyard is a mosque with a fountain for pre-prayer ablutions. It became the first city prison under British administration. After spending most of the 1990s being restored, the inn has been revived as a thriving arts centre, consisting of several galleries and workshops. There are also several courtyard cafes and souvenir shops.

The Büyük Han is just a few steps from the border crossing and is a real treasure. You wouldn’t know it was there unless you were looking for it, but once you go through the door you can see why it used to be so popular in its heyday. Although it isn’t all that large, you could easily spend a couple of hours wandering in and out of the small shops on the terrace level. There are several craftsman who sell handmade soaps and other beautiful crafts, as well as some of the more regular souvenir items that can be found all over the island.

Once you’re done shopping, there are no fewer than three coffee shops and cafes on the lower level, each of which would be a fine place for a coffee or snack. It makes for a great stop on your tour of Nicosia and is not to be missed!