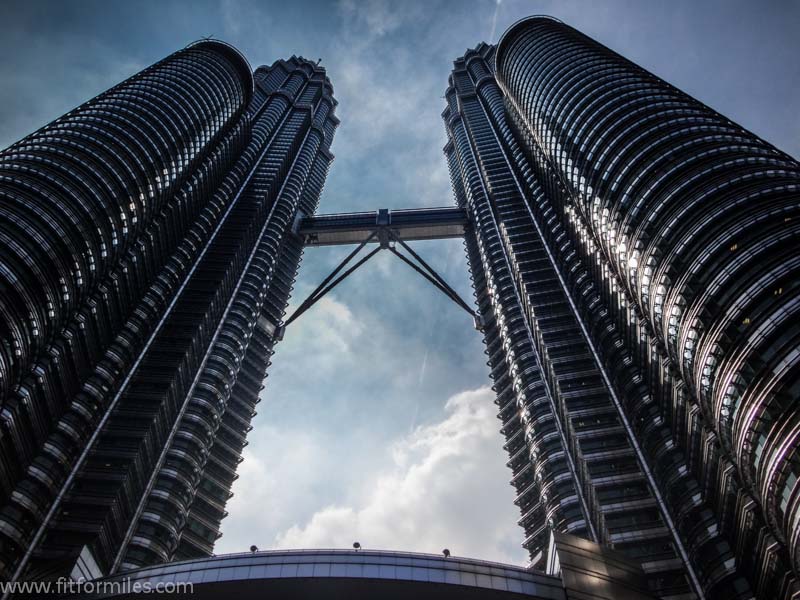 We stopped in Kuala Lumpur, Malaysia for 3 days as part of our Round-The-World trip in March 2017. We loved the city and all that Malaysia had to offer–with the exception of the humidity!

We arrived in the afternoon after a long ride in from the airport, flying from Bangkok. We were able to get an Uber (which can be tricky at airports sometimes because of the confusing pickup areas, lack of communication, and spotty Internet access) and took that directly to the hotel instead of messing with the trains which would have required some walking and switching lines. Only cost about $16. The airport is quite far from the downtown area–about 37 miles/60km–so it took us a while to arrive. The traffic was bad, but not as terrible as Bangkok.

Check-in at the hotel was easy and we got upgraded to a larger room and given Club privileges because of my SPG Business card. We headed up to the lounge for their “cocktail hour” (which was 3 hours long) and were very impressed. The lounge runs like a restaurant: hosts greet you, show you to a seat, and get your drinks. They had a modest buffet with decent options (enough for a full meal for sure) so we ate a bit, had a drink, and thought about what to do with our evening.

Veronica is great at finding local performance venues, and she came across a small and popular jazz club called No Black Tie which had a duo performing that night. Tickets were about $8 each, so we jumped on it. We were able to book online and grab an Uber to the club easily. The show was nice, although it was just a pianist and guitarist playing classic hits by John Coltrane and other famous musicians. Still, a good show. We didn’t have wifi access (Keepgo doesn’t work in Malaysia) so we had to get a regular cab back to the hotel for twice the price ($2 vs $1! The humanity!). It was a great first night!

We got up at 8:30 to check out the gym and get workout in, which was great. They had a pretty excellent facility. We grabbed breakfast in the lounge and then headed out to see some sights, stopping first at the Petronas Towers, the two iconic pillars in the city. They sell tickets to their Sky Bridge for about $16, but they sell out fast. We got there at  1030am and they were already sold out for the day! Slightly crestfallen, we hopped in a cab and headed for the Islamic Museum on the other side of town, costing us 20MYR ($4.66) to get there (about 4x the price of an Uber, but again we were stuck without wifi so we had to way to call one). A note about this kind of cab: they have signs on the outside saying, “metered taxi, no haggling allowed”. You’d think this would mean a more honest and favorable fare, but after a couple of rides it was clear that this was just a way for them to charge 2-3x the normal fare with no blowback. Indeed, they start their fares at 6MYR ($1.40), which is more than we paid for any Uber ride within the city total. What a crock.

Anyway, the Islamic museum was fantastic. It was by far the best collection of information and artifacts about the religion that I have seen. It was big (but not overly so), everything was well displayed and marked, and it had a decent amount of interactive pieces. Totally unlike the other museums I’ve seen elsewhere and in the middle east. They all need to take a page out of these guys’ Koran! After the museum we walked next door (about a mile) to the Bird Aviary, supposedly the largest open-air aviary in the world. It was really cool! Tickets were about $10 and we got to walk through these various locks with different kinds of birds like toucans, parrots, and cranes that are native to Asia and which I have never seen. It was surprisingly good and I liked it a lot. The downside was that the weather was miserable–so hot and sticky I could barely stand it. We stayed for about 45 minutes and then hopped in a cab from there (which we had to pay an extra “processing fee” if 2MYR for, but we’re stuck since we were in the middle of nowhere) and headed to the Central Market. Not much to see there, it was just an old building from the 1800s with a lot of little shops inside. We didn’t stay long, instead navigating to a little eatery I had starred on the map which was mentioned as a cheap place for local grub. Indeed it was! Plastic chairs and all, we chomped on some spring rolls, rice and fried tofu for about $1 each. It was enough to keep us going for the afternoon. We then walked around a little, stopping into both Chinese and Hindu temples on the way to the train station. The train here is like Bangkok in that it’s dirt cheap, fast, and air conditioned. However, also like Bangkok, it has 2 or 3 different kinds of trains that go to different stops and don’t really connect, so although there was a stop right outside our hotel it wasn’t for the right kind of train so we had to walk about a half mile from the other stop to get back. Not bad, and about 1/6th of the cost of a cab.

At the hotel we showered, hung out, and stopped by the lounge. Veronica had made dinner reservations for us at a place called Bijan, which is a popular and moderately priced Malaysian food restaurant. We took an Uber there for less than a dollar and had a great meal. I wasn’t super hungry since we had eaten a bit in the lounge a couple hours earlier (and they had gummy bears!) but I had a chicken and curry dish which was awesome. Malaysian food isn’t as spicy as Thai and they use lots of coconut in their sauces and rice. It was delicious. Veronica had a fish which was also good and we topped it off with a coconut flan at the end. They had wifi at the restaurant so we were able to get an Uber back to the hotel.

The next day, we slept in a little but I was up and back in the gym for a short lift and hour-long run. Veronica went to the pool for a swim and then over to the mall next door to get her hair done after breakfast (we went to the restaurant instead of the lounge this time). We packed up and headed out soon after, getting and Uber from the hotel to the airport which was another hour plus ride (longer than the flight to Singapore!).