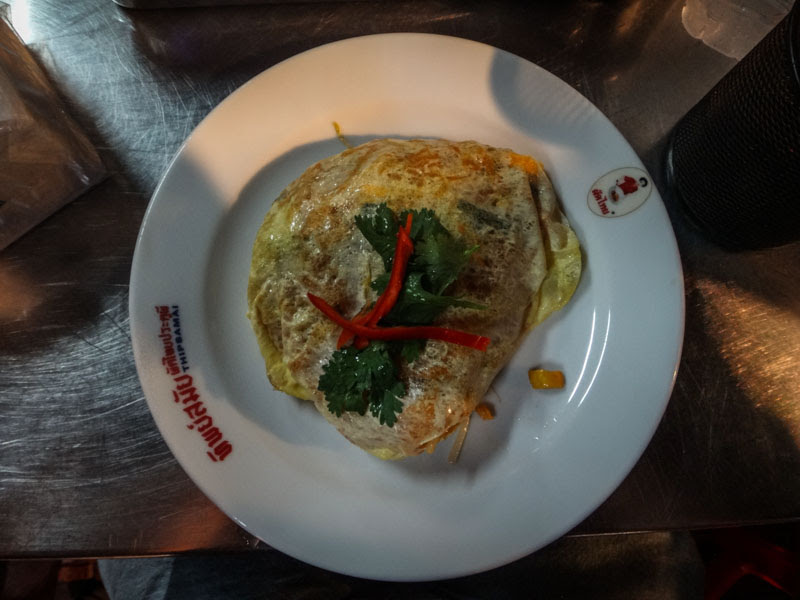 While in Bangkok in February 2017, we joined one of the many food tours in order to get a taste of real Thai cuisine in a limited amount of time. We had only a couple of days in the city, and the food tours offered an easy and convenient way to sample the local eats. One of the more popular tours is arranged by Bangkok Food Tours, which offers several different options. Because of the heat and our schedule, we decided to sign up for the Best Eats Midnight Food Tour by Tuk Tuk, which costs 1,900 THB/each ($56) and includes (from the site):

The process for booking is simple and can be done online. By selecting your desired tour on the Tours page, you can select the “Buy Ticket” button to view the schedule and complete the booking (ours was done through PayPal). Within a few minutes, you’ll receive a confirmation email along with information on how to sign up for their free medical insurance (we didn’t bother) as well as instructions on where to meet and other useful info.

We booked our tour for a Tuesday night and met at the Sam Yan MRT (train) station at 7:30pm. There, we met our guide and received pamphlets outlining our schedule for the night. We talked about where we would go, what we would eat, and then piled into some nearby tuk tuks to take us to the first stop.

After a few minutes whizzing through the streets in our tuk tuk (there were 5 others in our caravan), we arrived at the first stop of the night. I had forgotten until just now that our first stop was “secret”, and unfortunately didn’t catch the name of the place as we were walking in. Not really sure why they keep these places “secret”, but I guess it’s to add some mystery to the whole thing. If it’s any consolation, I did get a couple pictures of the inside which won’t help you find it but should give an idea of what we were working with.

We each got a bowl of soup with chicken, onion, mushroom, and some other veggies along with a side plate with some more chicken and noodles. And, of course, sticky rice. The place was loud, crowded, and small–much like everything else in the city. The food was good, but I was quickly ready to head to the next place.

Another short tuk tuk ride landed us as the next stop, Ann Guay Tiew Kua Gai. Before entering, our guide brought us around to the back of the restaurant so we could watch the cooks making their signature dish and learn a bit more about it. Essentially it’s a mixture of egg, noodles, chicken, and vegetables fried in a wok with some oil and spices. I’m starting to sense a pattern here. After watching this poor guy sweat over his fire for a couple minutes, the guide told us to watch carefully as he was going to show us something special.

He dropped some oil/gas/napalm into the pan and WHOOSH! Not sure if he had any eyebrows left after that, but he seemed to get as much of a kick out of the act as we did. We then went inside, where we faced another micro-dining room. We had to wait about 15 minutes for a table to open up, but we were cheeck-to-jowl the whole time. We were each brought a bowl of the concoction that was being prepared outside, and it was delicious so we scarfed it down. I’m hoping whatever flammable and noxious substances he poured into that wok had burned off by the time it arrived, but you never know. Before we knew it, we were being shuffled out the door to stop number three.

The third place we visited was the flower market, which is exactly as it sounds. It’s a warehouse with rows and rows of stalls where people are selling flowers of all kinds. The most beautiful and plentiful flowers being sold were orchids, which are very popular in this area of the world. They literally had them piled high and spilling over with more than they knew what to do with. They were selling them by the handful for 10 THB ($0.30), which was blowing my mind. This kind of stuff goes for, I dunno, 100x that price anywhere else in the world. If only I could export them to the U.S. without them all dying along the way… We walked a couple loops around the place, took a big whiff of the fresh scent, and headed back out into the street. We had to walk a couple of blocks to meet our tuk tuks, and along the way our guide said we were going to stop for a “snack”. You can probably guess where this is going. Feast your eyes on the gourmet spread we were presented: Crickets, beetles, and a handful of other roasted insets for your dining pleasure. Our guide scooped a big handful of the crickets and doled them out like candy. Among the others in the group, I think I may have been the only one to dig in and try one. It was crunchy, airy, and a little bit sticky. Not my ideal on-the-go nibble, but I hear they’re a good source of protein.

After fully cleansing my palate, we jumped back into the tuk tuks for the next stop.

We were dropped off outside the Wat Pho temple (AKA The Reclining Buddha) which, protip, is open in the evenings. Although you can’t go inside the temple and see the reclining buddha itself, you can walk around the grounds. We sauntered through the temple and marveled at the reflective qualities and craftsmanship. They are really quite remarkable pieces of work. There wasn’t too much else to see there at that time of night, so we only spent maybe 25 minutes walking around before walking to our next destination.

This is the second “secret” place on the tour, which, spoiler alert, is right across the street from Wat Pho. It’s called Bitter Deck and is a bar on the roof of a hotel. What’s unique about this place is that it has a direct view of both Wat Pho and Wat Arun that, while partially obscured, is quite spectacular.

We had a beer there and took a load off to digest the two meals we had just scarfed down (two and a half if you count the crickets!).

Before long, we were on our way to the final stop.

The last place on the list was Thipsamai, which apparently is one of the most famous pad thai restaurants in the city. There, we waited in line with about 50 locals to get our serving of pad thai, which had a coating of egg that I had never seen before. It was absolutely scrumptious and my favorite meal of the entire tour. Even though I was pretty stuffed, I could have eaten at least three more of these if given the opportunity. Alas, it was nearly midnight and we needed make our way back to the hotel to avoid turning into pumpkins.

We unceremoniously ended our tour at Thipsamai by thanking the guide and clambering into our tuk tuks for one final ride back to the hotel. In about 15 minutes we had arrived (tuk tuks can weave in and out of traffic much easier than cars!) and promptly fell into a deep food coma.

We had a great time on the tour! The one and only grievance I have is that it is incredibly expensive compared to the local cost of what was provided. Judging by the prices I saw at other restaurants and comments I read online after the fact, the total for our meals would have been about $8 had we done it on our own. However, without the guide and transportation we never would have known these places existed, nor what to ask for when we arrived. We also wouldn’t have seen Wat Pho since we ran out of time during the day nor had the great view of the temples from the rooftop bar. So while this was definitely a splurge in terms of Bangkok prices, I think it was worth the price given our circumstances. If you’re short on time and want to have a quick-and-dirty (and crunchy) tour of Bangkok, check out the Bangkok Food Tours.