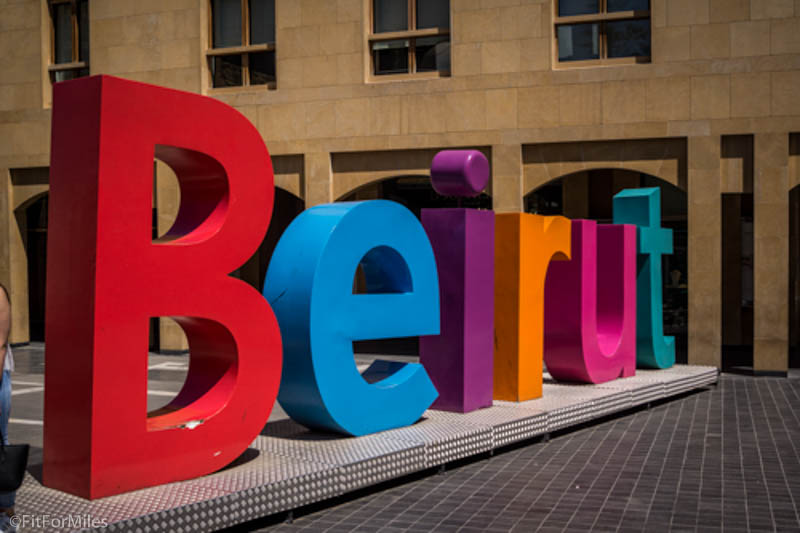 First things first about arrival: when arriving in Lebanon, the border agent in will ask about whether or not you have travelled to Israel, but simply visiting the country does not preclude you from entering Lebanon. Just be truthful about why you were there (to visit a friend, travel, etc.) and everything should be fine.

Also – U.S. citizens do not need to purchase a tourist visa for Lebanon. Before our trip we found lots of conflicting information about this; one site said we had to pay $35, one said we couldn’t get it on arrival, etc. I can only imagine they were talking about different visa types or visas for those from other countries. We came prepared to pay the $35, but it was never mentioned at the border and we were never asked about it.

We arrived in Beirut (BEY) on a Friday evening from Cyprus on a Middle Eastern Airlines flight which was over 40 minutes late (and flying time is only about 25 minutes). I was surprised that we flew in a large A320 with full business class for such a short flight. After a long wait at border control, we went out to the terminal to get a cab. We had planned to take an Uber from the airport (I looked online before and noticed that it was available), however as soon as you leave the inside terminal of the airport the wifi completely drops out, and thus I we were stuck with taking a regular cab.

Before relenting, I stopped in at one of the terminal shops that was advertising SIM cards and inquired as to the price. I was told, with a straight face, that the price is $71 (US) for 500MB of data. I couldn’t control my guffaw and laughed out loud, swiftly exiting the shop. As I would soon find out, the joke was on us as we got hosed out of $35 when taking a “metered” taxi to the hotel, a mere 5.5mi from the airport. We let the guy know that we knew what was happening and how lame it is to take advantage of people like that, but it fell on deaf ears.

We stayed at the Intercontinental Phoenicia hotel, which we booked with a combination of Free Night Certificates from our IHG credit cards and IHG points that I had in my account (from the credit card’s signup bonus). Read my hotel review for more info about the accommodations.

That evening we had made reservations at Baron Restaurant, recommended to us by some friends. Since the hotel isn’t conveniently located to any of the trendy neighborhoods, we got an Uber to take us there (which was great and dirt cheap once I could finally get Internet access!).  We had a fantastic meal including an appetizer of cauliflower, which was literally an entire head of cauliflower that was baked and covered in a yogurt tahini sauce with pomegranate seeds. It was really incredible.

Veronica had a duck leg for her main dish and I had a brisket sandwich. The food was very good, but quite expensive. The bill was about $100, but we left satisfied and I even brought home half of my sandwich for the next day!

For our first full day in Lebanon, I arranged for us to go on a group tour of Anjar, Baalbek, and Ksara. I made a separate post about this outing since there was so much to cover!

We got back to the hotel at about 6:30pm and decided to have a light dinner (since we had a late lunch on the tour). We went to a falafel place called Falafel Sayhoun, which was recommended to us by another friend (and apparently is well-known). We took an Uber there, got our dinner for about $5 total, and ate while standing outside. The place is super small and literally all they make is falafel sandwiches. They have it down to a science and have the thing ready in about a minute. They make it with mint and radishes, which is a nice twist. After eating we walked into “downtown” and explored the “souk”, which is just an outdoor mall. Not much for us there, so we headed back to the hotel.

On Easter Sunday we decided to sleep in a bit knowing that not much, if anything, would be open. We then made our way to the Sursock Museum, which was actually open (we wanted to go to the Beirut Museum but it was closed). On the way we stopped first at Al Madoun cafe for some overpriced eggs and coffee, as breakfast was not included with our hotel stay. The Sursock Museum is a modern and contemporary art museum in a villa that was previously owned by the Lebanese aristocrat Nicholas Ibrahim Sursock. Although, as I’ve mentioned before, I’m not big on modern art (even in Chicago), there was nothing else open so this was our only opportunity to get cultured. Free to enter, the museum had some interesting exhibits that I actually enjoyed.

One of the exhibits I enjoyed  was on travel within the region in the “golden age”, i.e. when travel books and ads were just coming out, which was pretty cool.

The villa also had some really nice random rooms that you can explore. This one was simply for guests to hang out in before he came out to meet them: There was also a couple of different exhibits about the revolution in Egypt, including a a documentary-type of film using video captured from the cell phones of looters as well as a more film-like picture about the same time period. We stayed at the museum for a good hour or so before moving on.

We had lunch reservations at Enab Restaurant, which we walked to from the museum. There wasn’t much going on anywhere, so we decided to go in earlier than our reserved time, which was no problem for them. Our meal was pretty good and I liked the decor of the place–it reminded me of a tastefully-designed grandmother’s house. From the restaurant, we did some more walking around the city, stopping at a small public park and other points of interest along the way.

We got a cab back to the hotel after and spent the rest of the afternoon checking out the pool and gym, which are great. That night we took a stroll on the Corniche and ate an early dinner at Al Forno, which was pretty bad. I ordered spaghetti and meatballs which was dry and tasted like they had been sitting under a heat lamp all day. Veronica had a pizza that was fine. At least we had a nice view! We headed back to the hotel after dinner and called it an early night.

Our flight back to Cyprus was at 5pm, so we had some time in the morning for one more walk around the neighborhood. We ended up at a little shisha bar/cafe on the water, where we spent the afternoon filling our lungs with peach-flavored smoke and our bellies with a final serving of hummus and salad. What a great way to spend our last few hours in Lebanon! We took an Uber back to the airport and were soon on our way home.