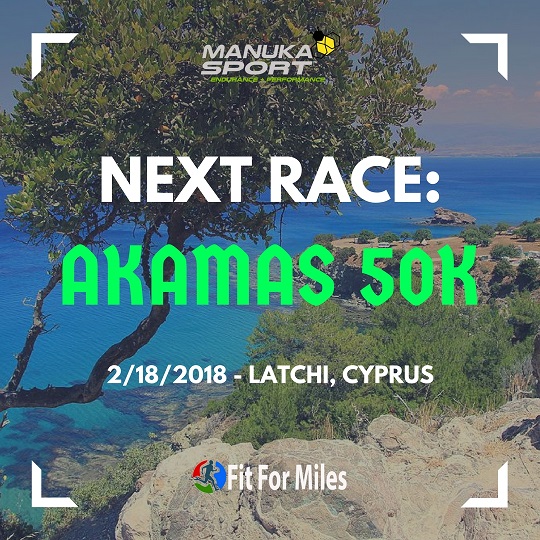 The first ultramarathon on my calendar in 2018 is a a 50K at the Akamas Blossom Trail Running Festival . This race is set in the beautiful Akamas Peninsula of Cyprus, on the north-west part of the island. This is the first edition of the race, which also features 7k and 21k options.

I have been shaking my fist for a “winter” race since I arrived in Cyprus after being exposed to the intense summer heat. Most of the Ultras here are set either in May or September, meaning you have to train during the hottest times of the year. I dealt with it when training for the Buff Troodos Mountain Ultra and ran in it during the Garmin Troodos Mountain Marathon, but it wasn’t pretty! Now, at long last, there is a race that will be both pleasant to train for and to run. What’s more, this area of Cyprus is stunning and largely untouched with the exception of a couple of short hiking trails.

All entry information is located on the race’s website as well as their Facebook event. Entrance fees are as follows:

It doesn’t get much cheaper than that for an ultramarathon, especially knowing how well it will be organized and the goodies that will be at the aid stations!

Here is a map of the course:

In talking with the race organizers (Cyprus Trail Runners), the elevation gain will be moderate and not the 10,000+ ft of the Buff Troodos Ultra. That will be welcomed, considering I have been travelling and eating a lot over the holidays and haven’t had the chance to do a lot of long runs. While I haven’t completely shifted focus to my upcoming Appalachian Trail thru-hike, the preparation and training has definitely affected my running. So, it will be nice to not have to slog my way through this – although it certainly won’t be a cake walk!

Introducing the first-ever trail running ultra in the beautiful Akamas Peninsula of Cyprus – in the early spring when the first blossoms are starting to colour the fields.

The 50km race, which has been awarded three qualifying points by the UTMB/ITRA, is a welcome addition to our annual Akamas Blossom Trail Running Festival, which also features 21km and 7km trail races.

The 50km (more or less) race will set off at 6am with a 10-hour cut-off and will have minimum four aid stations. It will take in Fontana Amorozo, Cape Anaroutis (the western tip of Cyprus) and the lonely lighthouse on the hill.

Since the Troodos Ultra back in October, I have maintained a decent level of fitness that will (hopefully) carry me through most of my training for this race. In order to get myself into 50k shape I’ll need a couple more long runs under my belt, which I plan to do in the coming weeks. Having done two ultras this summer, I know that if it came down to it I could simply walk and finish the race – but I’m hoping it won’t come to that. The key for me will be avoiding injury (isn’t it always?), as I will be just over one month out from starting my Appalachian Trail thru-hike. As such, I won’t be pushing my limits and am not afraid to drop out (DNF) if needed to save myself from a long recovery.