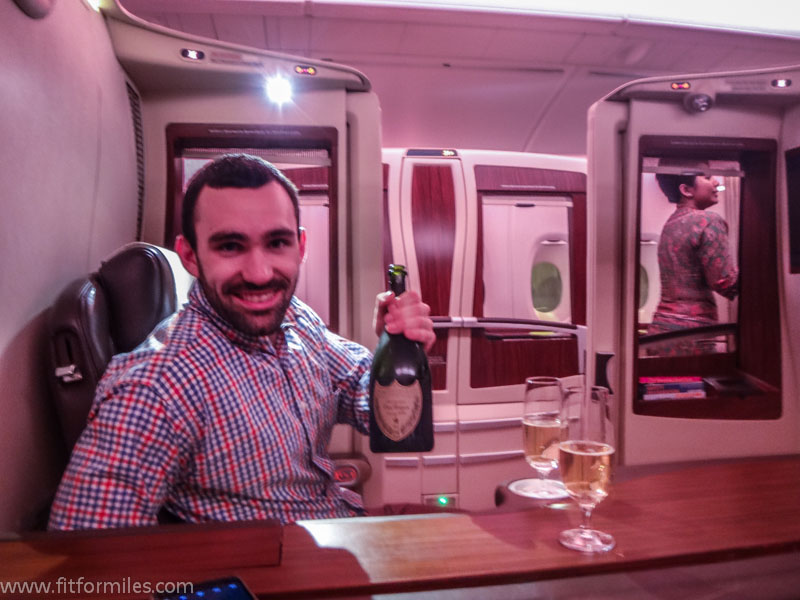 Flying Singapore Airlines First-Class Suites from Singapore to Paris was a once-in-a-lifetime experience, no doubt about that. Because of that, many bloggers have done reviews on this product and so it has lost a bit of it’s need for another review. I honestly don’t have too much to add, so instead I’ll just give a high-level overview of what it’s like.

First, it starts with the Singapore Airlines First Class check-in, which is a separate driveway entrance at Terminal 3 at Changi Airport. You get dropped off curbside and a porter grabs your bags just like at a hotel, and you’re escorted directly inside to a check-in lounge area with private desks for each passenger. I have read that some people experienced queues here when there are lots of people, but we arrived at about 7:30pm and were the only ones there. We took a seat at the desk and handed over our passports, and within a minute we had our boarding passes and special golden ticket invitations to The Private Room–SQ’s extra exclusive lounge ensconced within the First Class lounge.

After getting our tickets (our bags were automatically checked in for us, we never even touched them), we exited the lounge area to a private immigration counter especially for this first class terminal. Again, there was no line as we were the only ones there, and a very friendly customs officer checked us through in under a minute. Just like that, we were done. As soon as we exited the customs booth, we were standing in front of the SilverKris Lounge, which is an entire suite of SQ lounges that encompasses the entire mezzanine level. It includes the business lounge, first class lounge, and Private Room. Golden tickets in hand, we headed up the escalator, feeling like Charlie on his way to the Chocolate Factory. We flashed the tickets at the entrance and were escorted into the bowels of the lounge, where we were seated in what mimicked a restaurant, and given a set of menus from which to order our meals. There were lots of great options, but I went with the “Boston lobster” and Veronica had lamb. The dishes came out in about 10 minutes, just as we were finishing our first glass of Reisling.

The food was very good considering, and we enjoyed it thoroughly. I took lots of pictures, ordered a Macallen whiskey, and we hung out for about an hour before deciding to explore the incredible airport a bit more. We found the lounge to be very quiet and the buffet offerings to be sparse–I guess because they had an actual menu to choose from. The other facilities were great as well–including the showers, bathrooms, private “relax” rooms, etc. Everything you would want after coughing up $13,000 for a plane ticket (which we didn’t do, thanks to the mileage redemption!). We headed out of the lounge and located an information booth that noted the various amenities in T3, which include a (free) movie theater, butterfly garden, ‘nap zone’, and a bunch of lounges. We stopped by the “nap zone” and noticed a massage parlor, so we decided to get a quick rub down (45 minutes) to help relax a bit, and it really did the trick. I got a 30-minute chair massage + 15min foot massage and Veronica got a nice 45-min table massage, each of ours being about $55 total. Not bad!

We then walked over to the movie theater, where we watched just a few seconds of Ice Age, and then off to the Butterfly Garden. By this time it was dark and there wasn’t much light in the garden, but we saw some moths and sweated out there (it was still pretty damn hot) before retreating back to the air-conditioned terminal. By then, it was just about time to board so we headed for the gate (having to go through security there instead of earlier at the terminal). We arrived at the gate a few minutes before boarding and were allowed to board first, via our own separate jetway, and were escorted right to our seats. It was awesome! Our seats were just as they have looked in all the pictures and blog posts I saw prior to booking. Brown and cream leather, large, plush, and comfortable. We were offered champagne immediately after sitting down, and we went with one Krug and one Dom Perignon to test them out. The Krug is a bit sweet for my taste, so I ordered a Dom instead. I then sheepishly asked if I could hold the bottle and take a picture with it, and the guy was happy to leave me with the bottle for about 20 minutes. I think they get this a lot (based on the pics I’ve seen!). Before long, we had been given a comfy pair of pajamas and were ready for takeoff! Veronica and I both watched the movie Manchester by the Sea (they had a very good collection of movies on the in-flight entertainment) and had our dinner. We had both done ‘book the cook’ to choose our entrees–I went with a marinated chicken and Veronica went with red curry. Hers was great and mine wasn’t. Turns out mine was just a cold chicken salad, which is not what I had interpreted the dish as whatsoever. I still ate it and it was alright, but I definitely wish I had something more hearty. After the movie finished (at about 2:30am Singapore time), we asked the flight attendants to make up the beds. This process took them about 10 minutes as it’s not a simple flattening of the seats. Instead, they fold the seats down and then release a hatch containing, essentially, a Murphy bed that sits on top of the seat. It’s a completely flat, 2″ thick mattress complete with a duvet, pillows, and all the accessories.

By this time we had our Salvatore Ferragamo amenity kits with sleep masks and such, so we were ready to hit the sack. With our seats being next to each other (in the middle aisle), we essentially had a queen-sized bed to share and it was awesome. We both fell asleep pretty quickly and were out for at least 6 hours, although I did wake up several times.

A couple of hours before landing, I got up, went to the bathroom, had some coffee, and started a movie (Allied with Brad Pitt-great flick!). A bit later, breakfast was served and I got what I had booked–an Angus burger. A bit odd to have at 6am Paris time, but perfectly normal at 3pm in Singapore! It was much better than my dinner, thankfully, and really hit the spot. When we landed, we were given fast-track tickets for Paris’ immigration line and sent on our way.

I kept the amenity kit as well as as the pajamas, and disembarked with a huge smile on my face. This was the most incredible flight I have ever taken!

The only real thing I have to complain about was the WiFi. It was available, but ridiculously expensive. Most plans charge a base fee for unlimited use during a flight, but SQ charges per megabyte. So 50MB (hardly anything!) was $20 and then there was a fee per MB after that. It’s 2017, get with it. Since we slept most of the time, I didn’t even bother. Otherwise, it was really great.

This flight was incredible and an awesome way to end our round-the-world trip (even though we had another short flight in coach afterward). I would never pay $13,000 for those seats, but my careful collection of airline miles and points over the last couple of years made it all work out. We probably won’t get the chance to fly Singapore Suites again anytime soon, if ever, so I’m glad we took the opportunity to do it while it was available (although I booked several months out). Now, where can I get some more “Boston” lobster?