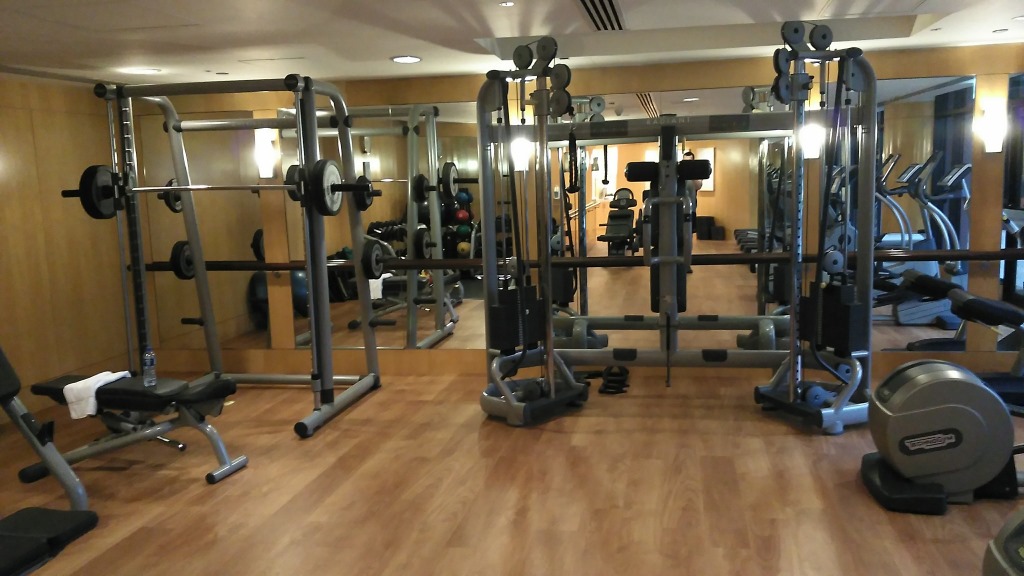 The gym at the InterCon Hong Kong is totally workable, albeit a bit underwhelming for such a fancy property. It’s strangely set up in that once you pass the check-in counter, there are rooms on both the left and the right side with equipment. Oddly, both rooms have similar equipment (it’s not like one is for cardio and the other for weights–both have treadmills and some kind of weight machines).

The equipment is of good quality (TechnoGym) and there is a decent amount of it. Plenty of treadmills and cardio machines as well as a decent selection of resistance machines.

The freeweights section was a bit lackluster, having only a small set of dumbbells. However, I was pleasantly surprised to see an EZ-Curl bar and preacher bench available, which I got a lot of use out of.

While they don’t have a squat rack (just a Smith machine), it was better than none at all. There is also a nice cable crossover with plenty of attachments.

I didn’t bother to take a picture of the view as it wasn’t any good. It usually overlooks the outdoor pool and the neighboring property, but it was all under construction and overgrown so there was nothing to see anyway.

This is a pretty  decent gym with a good amount of quality equipment. I was able to get in two nice workouts here without it being crowded, noisy, or boring. That being said, their equipment range was mediocre so don’t expect anything too grand.