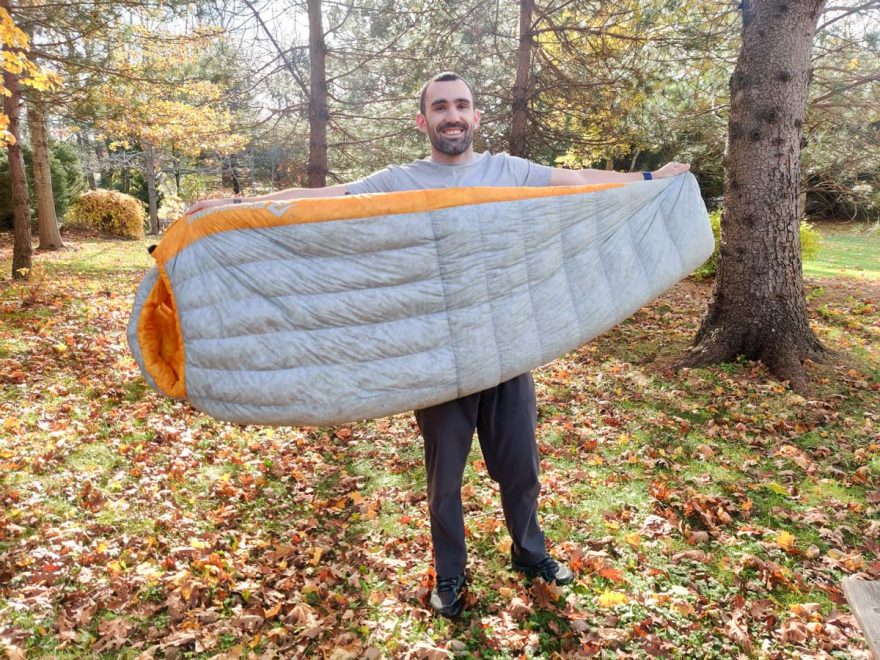 Ever since discovering backpacking quilts, which offer many of the same benefits as sleeping bags but are both lighter and cheaper, I have put my nose up at traditional sleeping bags as being needlessly heavy. Though quilts can be drafty and have inflated temperature ratings, their benefits make up for any shortcomings. Or so I thought.

I recently picked up the Sea To Summit Spark Sp III sleeping bag and must admit that my thinking is starting to change.

The Problem with Sleeping Bags

By design, sleeping bags are like a cocoon. You get inside and are fully enveloped, which can be both restrictive and inefficient because you are sleeping directly on top of (and crushing) the insulation beneath your body which has little effect in a compressed state.

Quilts solve that problem by removing the entire undercarriage of a traditional sleeping bag design and instead using your sleeping pad as the insulator beneath your body. This means that you get to keep all of the top insulation while removing the section that doesn’t do much for you anyway. Quilts will also often feature a cinch-closure footboxes and elastic snaps that allow for the quilt to be attached snugly to the sleeping pad or opened up like a blanket for warmer nights. They also strip away hoods for extra weight savings.

The result is a versatile piece of gear that both weighs and costs 20-40% less than traditional sleeping bags. One of my favorite quilts, and the one which I have spent more than 100 nights in, is the Enlightened Equipment Revelation.

The Downside of Quilts

While the argument can be made that quilts are the best choice for lightweight backpacking, they do come with drawbacks. The biggest downside to using quilts is that they can be very drafty. Because there is nothing except a couple of elastic straps keeping the backside of the quilt closed, it is very easy to let air in if you are a side sleeper or move around a lot at night. Even with the straps cinched tight around your sleeping pad, drafts always seem to find a way in which significantly reduces the effectiveness of the insulation.

A second and related downside to quilts is that it is difficult to assign a temperature rating to them because its efficacy depends on how well the user straps it down and what kind of sleeping pad they are using. For example, if an inexperienced backpacker is using a Therm-a-Rest NeoAir Uberlite sleeping pad with an R-value of 2.3 instead of a NeoAir XLite with an R-value of 5.4 there is going to be a significant difference in warmth.

Finally, quilts do not come with hoods and although this helps save weight it requires the user to bring a separate type of head insulation if the weather requires it since a lot of heat is lost from above the shoulders.

Despite the drawbacks of using a quilt in cold temperatures, I have often stuck with it for the sake of weight. This usually ends up with me wearing my entire wardrobe of clothes to sleep each night, but at least I’m not carrying around an extra half pound, right? Well, what if there was an option that combined the insulation properties of a sleeping bag with the weight of a quilt?

I came across this sleeping bag earlier this year and thought the specs were too good to be true: I was intrigued by these features and decided I should try it out. I had a trip planned to California’s High Sierra in September, which unfortunately had to be cancelled due to wildfires in the area meaning I didn’t have a chance to put this bag through its paces. That being said, I dove into the technicalities, read other reports, and did “armchair” (and backyard) reviews of the bag and am confident it will be a strong contender in the space. Here’s what I found:

Having spent hundreds of nights in quilts, I still feel they are the best choice under many circumstances, especially trips in the warmer months. The versatility and ventilation options paired with the light weight and cost make them the perfect option in those particular conditions.

That being said, I’ve shivered myself to sleep enough to know that quilts are not ideal in colder conditions. Between the unstoppable drafts and untrustworthy temperature ratings, they simply don’t perform well often enough to be viable in sub-freezing conditions. For trips when warmth really matters, I will be reaching for my Spark Sp III and recommend you do the same.

This product was donated for the purpose of review.