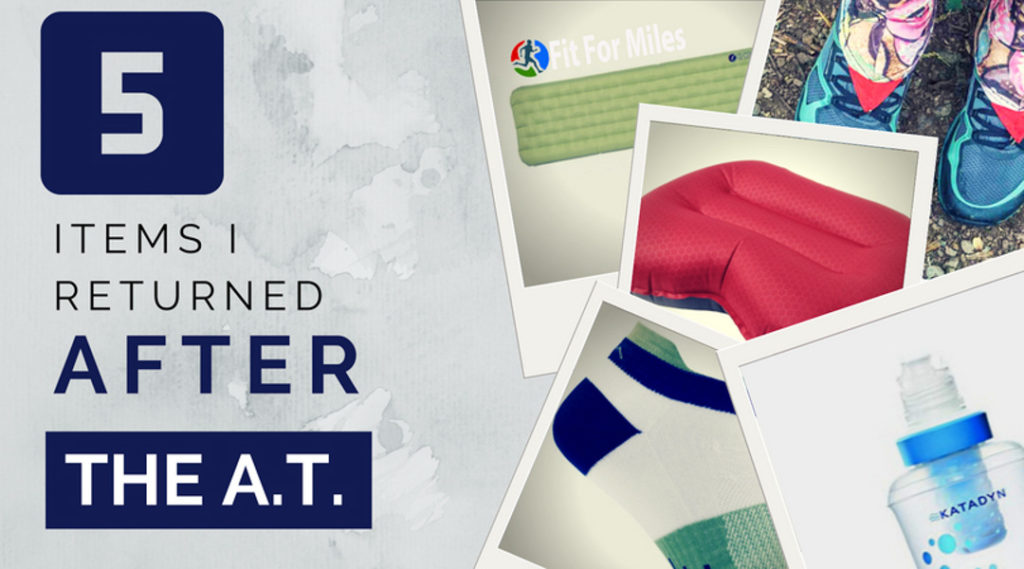 The advice commonly given to prospective thru-hikers is that you must rigorously test your gear prior to an extended undertaking such as the Appalachian Trail. While that is certainly advisable, it is unlikely that most hikers will have the time or patience to replicate the conditions you and your kit will likely encounter during a thru-hike. As such, it’s difficult to know how some items will fare after four to six months of daily use. You shouldn’t expect your gear to last indefinitely, nor much longer than a thru-hike, but there are some circumstances where items fail prematurely due to defects or misrepresentation and you as the customer should be compensated as a result.

As I published in my post thru-hike gear review, I was satisfied with the majority of my AT kit. Most items held up reasonably well and I didn’t have any spectacular failures on the trail, which I credit to my meticulous research and testing done beforehand. Despite that, there were still a few items I returned to the manufacturer during or after my thru-hike due to breakage or unsatisfactory performance. Thankfully, most retailers back up their pricey products with strong warranties that cover you in the case of defects, so I was able to get items exchanged or refunded without much hassle.

One of the keys to success on the trail is getting a good night’s rest, and if your sleep system is out of whack then you’re in trouble. Out of my three essential items for sleep, I ended up sending two back to the manufacturer after finishing the trail. The first was my inflatable pad, which had a slow leak throughout the entirety of my hike. I’d blow it up before laying down, and without fail it would be almost entirely deflated halfway through the night. I would usually wake up when I noticed I was laying on the ground and re-inflate, but half the time I didn’t even bother. Although it made for an easy pack-up in the morning, it was not ideal comfort.

Because it wasn’t a show-stopping issue (the pad was very warm and comfortable otherwise) and I didn’t want to go through the warranty process while on trail, I waited until finishing before sending it back. I plead my case that the pad was practically new when I started and clearly hadn’t been abused or punctured before it started leaking. BA responded quickly to my claim and had me send the pad in for review, which I did. About a week later, I got an email saying they were sending a replacement and it should arrive in a few days. I found the process quite painless and was happy with the result. The second item in my sleep system that I returned after the trail was my pillow. This thing worked perfectly until I reached the Hundred Mile Wilderness, and then somehow one of the valve grommets went missing. These grommets are essential parts of the pillow because it keeps the air from escaping once you blow into it – without the stopper there, the air just releases and it hardly hold any air. Since there was no cell service and I was nearly finished, I didn’t bother trying to do anything with this until completion.

Once I got home and before contacting Exped, I searched online for a replacement valve in hopes that it was something I could fix myself. I couldn’t find any, so I reached out and they asked me to send it in. Within a few days, they sent me a new pillow at no cost. Before departing for Springer, I had a hard time deciding on whether to bring a Sawyer Squeeze filter or the Katadyn BeFree. The BeFree was relatively new to the market but seemed to have great reviews by respectable hikers as well as an unmatched flow rate and smaller profile, so in the end I decided to go for it. For the first month of the hike, it worked tremendously. I kept it stashed in my hipbelt pocket and could filter a liter of water in under a minute without having to take off my pack – it was awesome. I did my best to keep it clean and followed the instructions to flush out the filter at least once per day. Life was good.

Then, the flow rate began to steadily decrease. No matter how much flushing and cleaning I did, it got slower and slower. By week eight, it was taking me close to 10 minutes to filter a liter of water, which was driving me insane. What’s more the hydrapak flask began to slowly leak, dripping dirty water into my clean bottle and onto my clothes which probably contaminated more water than I’d like to to think about (but I never got sick). By the end of the hike, even well-used Sawyer Squeeze filters could outpace me and I found myself dreading the process of fetching water. I took every opportunity I could find to fill up from a spigot, hose, sink, or any other potable source to avoid it.

In the end, I stuck it out with this filter but was very frustrated with it. They are rated for 1,000 liters of through-put, and I filtered less than half that amount during my entire hike. Since I bought this at REI, I was able to return it for a full refund at the completion of my hike when I explained that it did not meet expectations nor the manufacturer’s standards. In the future, I will explore other options such as a SteriPen or Sawyer Squeeze unless Katadyn makes some serious improvements. There is a lot to love about these shoes: low drop (3mm), wide toe box, and an outsole that is supposedly more durable than its competitors (e.g. Altras). I really wanted these to work for me, but after a couple of weeks on the trail they just weren’t cutting it. I started wearing the Terraventures in Waynesboro, VA, about the time my bunionettes started becoming a problem, and within two weeks the mesh was fraying on the sides and the sole was coming apart. I hadn’t even gotten to the rocks of Pennsylvania yet, but I knew these weren’t going to survive.

Thankfully, due to Topo’s generous return policy, I was able to get a full refund for these once I wrote them an email. I ordered a different pair of shoes and had them delivered to my next hostel stay (Rock N Sole), where I was also able send the Terraventures back to Topo. In the end, I went through five pairs of shoes during my hike and never seemed to find just the right pair. The AT eats through socks, no doubt about it. Any time you’re putting in that kind of mileage, you’re bound to wear through a few pairs. Knowing that Darn Tough has an excellent lifetime guarantee and replaces any worn out pair for free is a great reason to choose them as your go-to sock, but I quickly learned that not all models are created equal. I started the trail with a pair of their “Juice” socks, which claim to be “light, strong, versatile and always ready to get after it” – which they were, for about three days. Granted I had worn this pair a handful of times before hitting the trail, but by the time I arrived in Franklin, NC on day five they were toast.

I held on to them until I reached Hot Springs, where I was told by the outfitter that they no longer do in-store warranty exchanges because of the volume of socks they receive from hikers (in fact, the only on-trail outfitter I found that would do so was Shaw’s Hostel in Monson, ME). So, instead of fussing around with the online form I sent this pair home and purchased a new pair knowing I’d probably go through those as well. In the end, I only bought one more pair of socks and never had to do any more exchanges.

When I finished the trail, I submitted a warranty claim on Darn Tough’s website (super easy) and sent the socks in. Within a couple of days, they emailed me a coupon for the original retail price of the socks which I could use toward any new pair I wanted.

No piece of gear will last forever, but if something fails due to a manufacturing defect or does not meet the company’s standards then you should not have to suffer for it. Thanks to the generous warranty policies of many outdoor retailers, you can rest assured that proper compensation is coming your way if such a situation occurs. In my case, I had very few kit problems while on trail but ended up filing a handful of warranty claims once I finished. All the companies I reached out to were very helpful and accommodating with my requests and I was happy with the results. I hope this encourages you to not be afraid of using high quality gear for fear of wasting money.

What items have you sent back from your hikes?