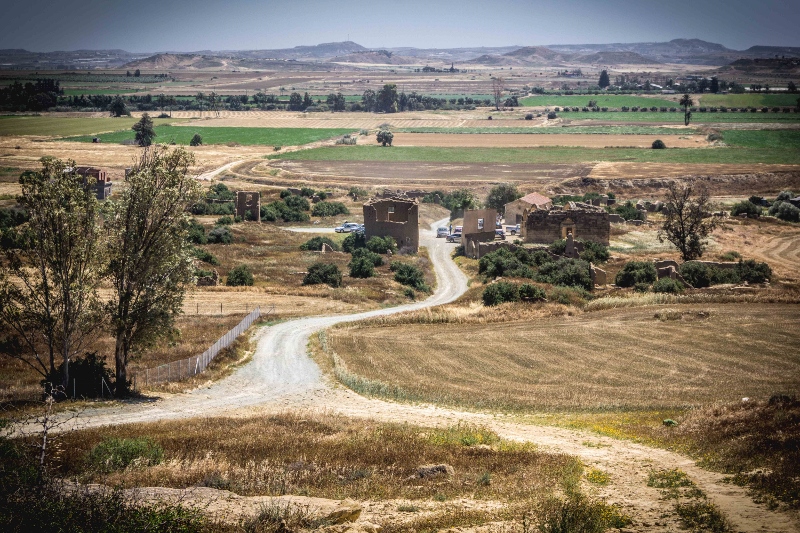 Always on the lookout for new things to see in Cyprus, we took a Sunday morning to go explore the small deserted village of Agios Sozomenos, which just just a 30-minute drive outside of Nicosia, the capital of Cyprus. Although not far off of the main motorway, one must navigate small and windy farm roads to reach the village which has very limited signage (Google Maps to the rescue!).

Agios Sozomenos was inhabited mostly by a mixture of Green and Turkish Cypriots throughout the 1800s, until the end of the century when it was mostly Turkish. By the 1960s, there were very few Greek Cypriots remaining and the entire village was uprooted and mostly destroyed during the Turkish invasion in 1974, never to be repopulated. It now sits just a few hundred feet from the U.N-controlled Green Line with a significant portion of the village within the buffer zone–officially in the southern (Greek Cypriot) part of the island–and has fallen into a state of deep disrepair. According to Wikipedia, Ayios Sozomenos has four registered inhabitants.

When we arrived, we were surprised to see that the parking lot was full. Seeing a crowd of people outside a small structure in the back of the lot (the only one still standing, as a matter of fact), we realized that they were all attending mass. The church seemed to be able to seat about 25 people and there were at least 75 squeezing in the doorways and spilling into the parking lot all trying to listen in. For a village of four, this church is certainly popular!

Luckily there were a couple more parking spots available, so we hopped out and walked around what’s left of the village, which isn’t very much. Most of the remaining structures have one or more walls missing, stairs that lead to nowhere, and overgrown shrubs sprouting through the floors.

As previously alluded to, a good deal of fighting took place here during the invasion, and it is said that many lost their lives here as well. Bullet holes in the sides of buildings throughout the village serve as evidence and a sad reminder of the battles that turned this village into a wasteland.

What’s surprising about the buildings in this village is that most of them were made of mud bricks–something I haven’t seen elsewhere on the island. The vast majority of Roman and Ottoman ruins on the island are of stone buildings which have lasted much longer. Most of these buildings are less than 100 years old, yet their current state would seem to indicate they have been decaying for much longer. As it turns out, mud doesn’t hold up as well to the elements as rock!

The creators not only used mud, but lots of other available materials as well including stones, wood, and plaster. The main church (not the one which is still used for mass), Ayios Mamas, is one of the few mostly-intact buildings remaining in the village. Built in the 16th century in the Lusignan style, it was rumored to have never been finished in the first place yet is wonderfully designed. Apparently there used to be lots of old trucks, farm equipment, and relics of the village pre-invasion scattered among the grounds, but they appear to have been all cleaned up. What remains of the site is rather little and unfortunately there are no memorials or signage dictating the history. Without that, a 20-30 minute visit is all that’s needed to capture the mood and a few photographs of this peculiar place.

An interesting documentary entitled A Detail In Cyprus was made about the village in 1987. Produced by Panicos Chrysanthou, interviews were done with villagers, past and present, about how life used to be here and how it all changed in 1974. I can’t seem to find a copy anywhere, but I’d be interested to check it out. Let me know in the comments if you know where I can find it!

Ayios Sozomenos is located within a 30-minute drive from Nicosia and just under an hour from Limassol. It’s between the villages of Potamia and Geri and very close to the U.N.-controlled Buffer zone. Entrance is free.

See the map below for directions–it’s rather easy to find (which is saying a lot for most places in Cyprus!).