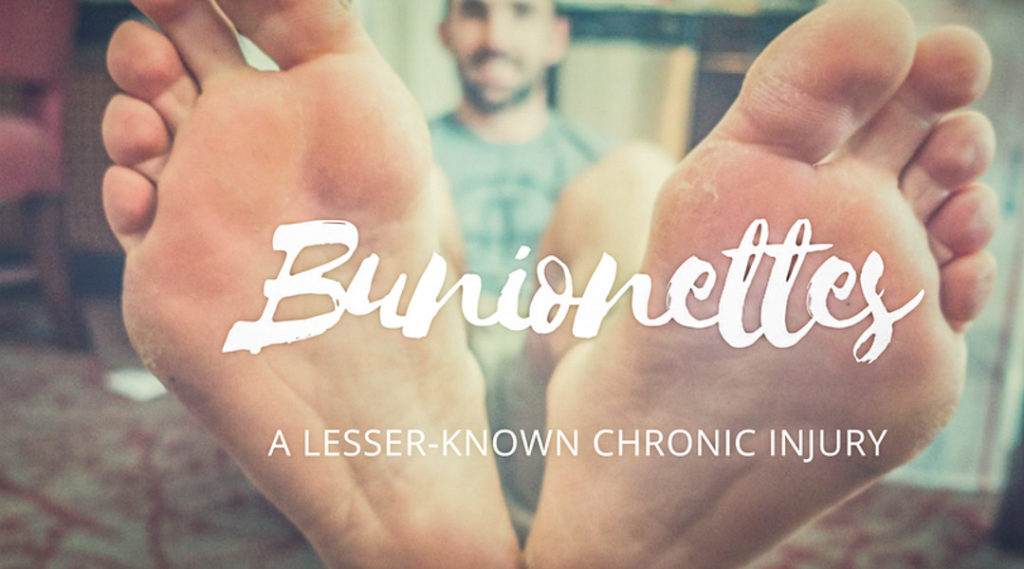 [disclosure] Feet are the workhorses of any long-distance undertaking. They do the lion’s share of the work and take the most damage of any body part. They get cold, wet, and sweaty in the name of transporting you from point A to point B and ask little in return except to be cared for. Sometimes, even if you’ve managed to escape the blisters and black toenails, your feet end up breaking down in other ways which can affect your ability to put in the miles you want on a daily basis.

Some of the most commonly reported foot injuries on the Appalachian Trail include plantar fasciitis, achilles tendonitis, and ankle sprains. While these conditions can indeed be problematic, there exists a plethora of information with which to reference and learn the various ways to recover. During my 2018 thru-hike, I successfully avoided these particular foot injuries yet fell victim to a sneaky and troublesome chronic injury called a bunionette, also known as a tailor’s bunion.

Cedars Sinai describes a bunionette as, “similar to a bunion, but occurs on the outside of the foot. It is a raised portion of skin that often becomes irritated and sore”. Although less common than traditional bunions which appear near the big toe, bunionettes can be just as painful and disruptive to someone who is on their feet all day (e.g. a thru-hiker). Bunionettes are also known as “tailor’s bunions” because the clothing tailors of yesteryear commonly sat cross-legged with the outsides of their feet rubbing against the ground, causing bunionettes to form.

Bunionettes are caused by pressure and trauma to the outside of the foot as a result of poorly-fitting shoes, arthritic conditions, or misalignment of the metatarsals (toe bones). They typically develop gradually and worsen over time, getting more painful and swollen as the condition continues and the body reacts by adding bone, further exacerbating the effect. Thru-hikers are particularly susceptible to tailor’s bunions because of the shock and damage that their feet are experiencing on a daily basis for months on end.

Treatment of bunionettes typically doesn’t require surgery, although it’s an option if other fixes don’t work. Non-surgical treatments involve changing shoes to a pair that have a wide toe-box (e.g. Altras), wearing sandals, or applying some kind of pad or cushioning to soften the impact. In some extreme cases, surgery can be used to realign the metatarsal or shave down extra bone that has accumulated.

Before hiking the AT, I had run a handful of ultramarathons and was already a proponent of Altra shoes. I never experienced foot pain during any of my training or races, so I figured I had my footwear dialed in. I started the trail wearing a pair of Altra Timps, which I had used to set the FKT for a little-known trail on the island of Cyprus just a couple of weeks before and they felt great. However, by the time I reached Damascus, VA they were toast and I was having some worrisome IT band issues that had me second-guessing my shoes. I switched to a pair of Oboz Sawtooth hiking shoes, which didn’t work for me at all, and soon after began feeling the bunionettes worsen as the stiff sole wore down my newly-formed callouses.

The pain was gradual at first, but after a couple of weeks it would be excruciating within just a mile or so of walking in the morning. Not knowing what was causing the irritation, Googled my symptoms and discovered bunionettes. I started taking ibuprofen a couple of times per day, which I hated having to do since everything else felt great, but it helped. As time and miles went on, I ended up switching shoes three more times in an effort to provide some relief to the swollen and inflamed abscesses.

The shoes I ended up finishing with were the New Balance Kaymins, which were the only pair of trail shoes I could find in a wide size. Although I missed the zero-drop and foot-form features of my beloved Altras, I tried a couple of pairs on and they just weren’t wide enough for my bloated feet. If I went up in size any more they’d become too long and unwieldy, so I needed to go with something that had a wide base all the way through rather than just at the toe box.

By the time I switched to the extra-wide Kaymins in Hanover, NH, my bunionettes were beyond help. Even with the extra space, the impact of the roots and rocks of New England eviscerated them more and more, to the point where I was taking 800mg of ibuprofen per day just to put in average miles.

In addition to swapping shoes and taking ibuprofen, I also tried using some silicone bunionette pads which I hoped would add a bit of cushion to the area and reduce pain, but unfortunately their flimsy design didn’t keep them in place and within a mile of walking they’d pads would be twisted and tangled inside my shoes, usually ending up on top of my foot rather than on the side.

In the end, the only fixes for me were to have an extra-wide shoes and take ibuprofen religiously. My feet hurt all day, every day, and I don’t think I could have put up with it much longer. More than food or rest, I was most looking forward to foot comfort after finishing.

Once I finished my journey, I immediately took a week off with almost no physical activity. My feet stopped hurting and I didn’t take any more ibuprofen. My bunionettes, however, didn’t go away. I started doing some light running a couple of weeks later and could feel them throbbing after a handful of miles, but it was nowhere near the level it was during the hike ((not walking around with a 25lb pack may have helped!). 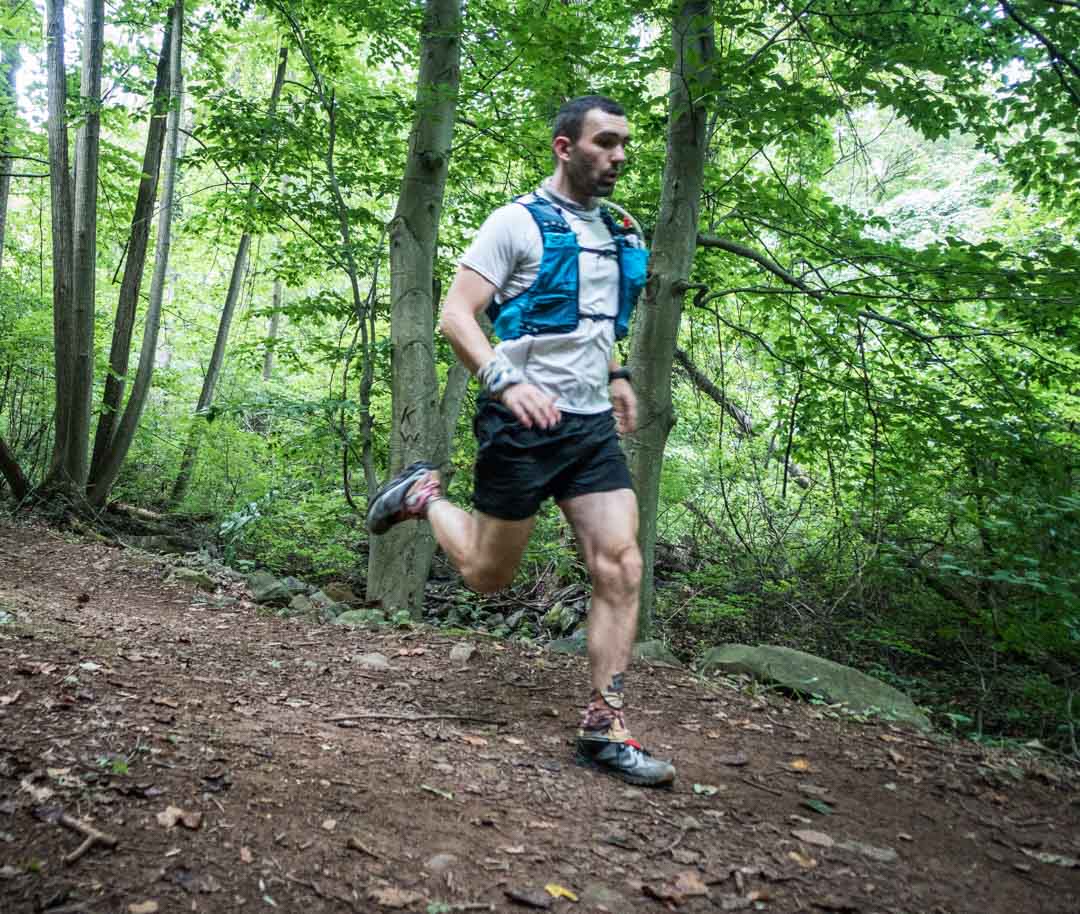 A month after finishing the hike, the bunionettes had improved but I nevertheless decided to go see a podiatrist to make sure there wasn’t something more serious going on that I needed to address.

The podiatrist took some x-rays of my feet and while he was able to confirm that I hadn’t crippled myself, there was a slight calcification on my left pinky toe that the doctor said was probably the cause of some pain. 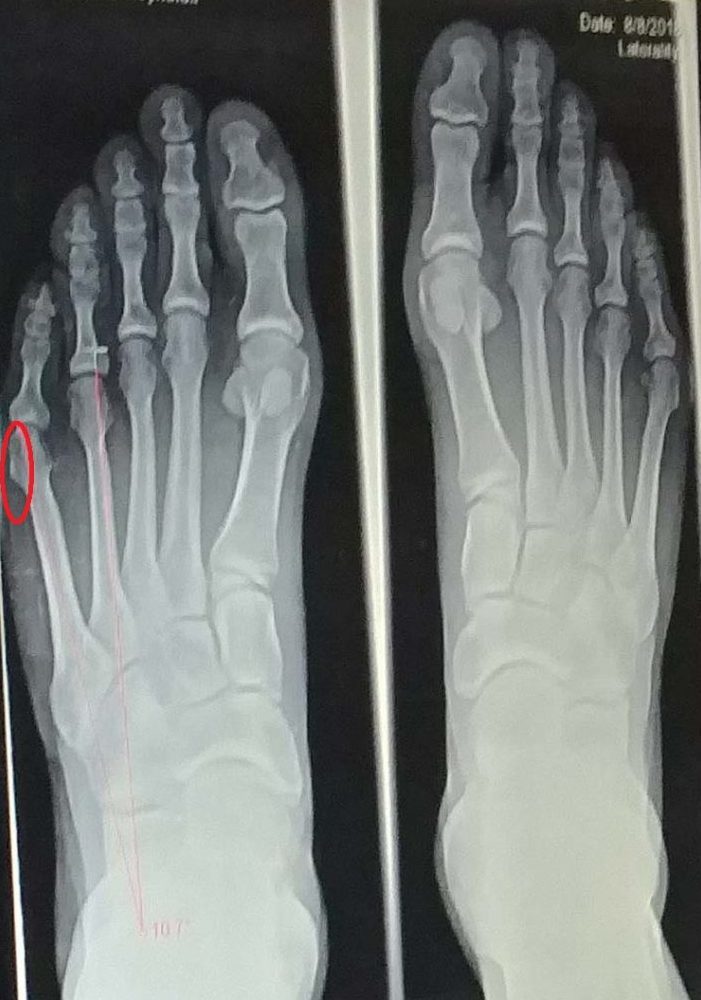 The doctor also measured the angles between my metatarsals and said they aren’t too askew, so he didn’t have any major concerns with the condition of my feet. We discussed treatment options for the bunionettes and he recommended Altra shoes (go figure) and perhaps a shoe stretcher that could help widen the shoe further. He noted that the zero-drop feature on Altras can help take some of the pressure off my forefoot that is normally applied with a higher-drop shoe since it shifts the impact of the step to the middle of your foot instead of the front. If Altra made extra wide shoes that could accommodate these behemoth growths, I’d be all for it. Unfortunately, their newer models seem to have a slimmer body and so I’m not sure they’ll work for me. Until the swelling permanently decreases on my bunionettes, I’ll continue wearing wider shoes to alleviate some of the discomfort.

Bunionettes, aka tailor’s bunions, are swollen lumps that appear on the outside of the foot and are caused by restrictive footwear and/or misalignment of the metatarsals. If not treated, they can become extremely painful and a real burden while attempting to thru-hike. Mine formed after the first 400 miles and worsened until I was medicating the pain away for the remainder of my hike. Although I was very happy with my daily mileage, the bunionettes had a negative impact on how well I felt throughout the day.

After seeing a podiatrist at the conclusion of my hike, I found out that I didn’t have many treatment options aside from surgery and shoe modification to provide relief. At this point, I’m not ready to go under the knife and will instead focus on pain mitigation through wider shoes and more rest. I’m hoping to train for another ultramarathon early next year, and my recovery from this and the AT in general will likely dictate the possibility of that endeavor.