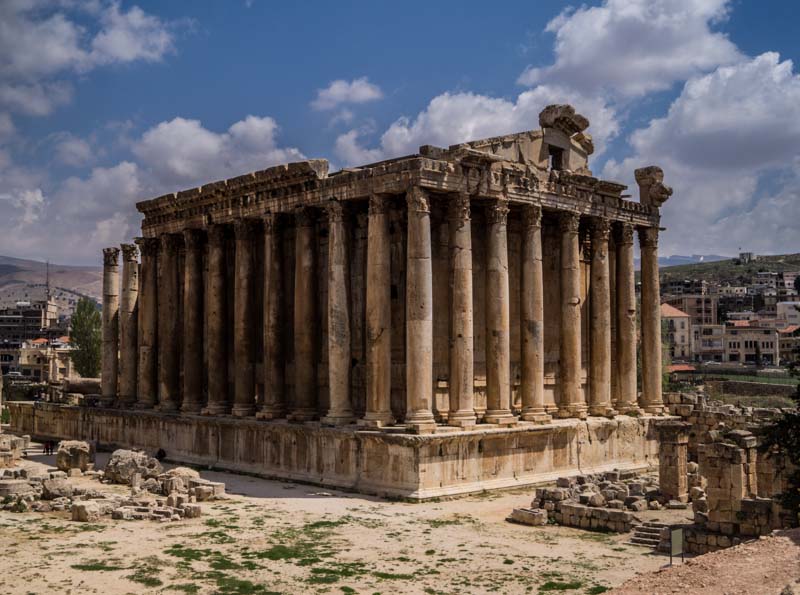 On our second day in Beirut, we booked a full-day tour through Viator (which contracted out to Nakhal, a local tour company which seems to have a monopoly on the market) who would take us to Anjar, Baalbek (two ancient cities) as well as the famous Ksara winery.  We were picked up at the hotel at 7:45am and shuttled to their main office in a minibus, where we had to stand in line, give our name, and then clamber on to a full-size tour bus with about 45 others. It was full retirement-tour status. There were a couple of younger families, but most were seniors. This is not normally the type of your we like to go on, but since these places are pretty far outside the city and we didn’t want to rent a car, this was the best option. It also wasn’t cheap–about $90 per person.
Nevertheless, we were ready to hit the road and the bus eventually took off with a rumble on the way to our first stop: Anjar.
Anjar is located 58km/36mi outside of Beirut and it took about 90 minutes to get there from the city (including a short pitstop). The city was founded in the 8th century by Caliph Walid I, a relatively new city compared to the other archaelogical wonders of Lebanon. At one time, it was an inland commercial center on the Silk Road and at the crossroads of the important trading routes between Beirut, Damascus, Homs, and Tiberiade. Unlike other ancient city ruins which have had multiple civilizations and influences reflected, Anjar is distinctly from the Umayyad period. Few other Umayyad remnants exist in the world, and Anjar is the largest. Excavations in Anjar began in the 1940s and continued for several decades, although it is thought that most everything has now been uncovered (Source: http://www.middleeast.com/anjar.htm).

The Ummayads were an Islamic dynasty that ruled in Damascus from around 660 to 750 AD.  Anjar was one of their top commercial centers, although it was never fully completed and instead was partially destroyed in 744 AD when Caliph Ibrahim, son of Walid, was defeated, ending the Ummayad’s rule.

Although mostly rubble nowadays, the city of Anjar was way ahead of it’s time in terms of amenities. It had fully-functional bathhouses with drainage, a sewage system for the entire city, and full fortifications.

Our guide was knowledgeable about the area, but it was difficult at times to hear and see what she was talking about because of the large crowd we were with. On a couple of occasions she would discuss the importance of a small room or area which we had to wait in line to see, and by the time we finished she was halfway through the description of something else which caused us to miss that section. Despite that, we enjoyed the ruins and were excited to get back on the road. Our next stop was a quirkly little attraction called “The World’s Largest Rock”. That happens to be a bit of a misnomer, as Uluru holds that tile, yet this piece is indeed the “World’s Largest Ancient Stone Block”, which I guess is a thing. The block itself weighs 1,650 tons (3,300,000lbs/1,496,850 kg) and measures 64 ft/19.6 m in length, 19.6 ft/6 m in width, and is 18 ft/5.5 m high. The story is that the Romans were excavating this block to bring to the nearby temple in Baalbek and then realized how ridiculously heavy it is and gave up. Actually, they’re not sure why they never finished quarrying this piece, but there it lies to this day. Our guide mentioned that this is also called the “Pregnancy Rock”, and that any woman who goes near will become with child soon. We made sure to keep our distance.

From there our bus navigated the slender streets just a few minutes more until reaching the crown jewel and main attraction–Baalbek.

Baalbek, also a UNESCO World Heritage Site and an ancient Phonecian city, is home to what is regarded as the “Largest Roman Temple in the World”. It came into existence in the 330s BC and remained an important location in the Roman Empire for hundreds of years until its conquest by the Muslims in 636 AD. As with Anjar, it played an important role in trade as it was the last stopping point on the Silk Road before entering Syria. Now, it serves as an outdoor museum and archaeological site for visitors to wonder at some of the world’s richest architecture.

First things first, you need to buy an entry ticket.

Once inside the gate, you are greeted by a large staircase. Can you imagine what this must have looked like 2,000 years ago? Well, yes, we can:

The grand (and now crumbling) staircase is pictured above on the right-hand side of the image. Must have been quite a sight! Moving in through the entryway, we got a glimpse of the massive courtyard.

Inside, the view is encapsulating. We wandered around, picturing the hexagonal chamber that once stood where all of the rubble now lies. Our guide told us that the reason everything is in such poor shape is because of the massive earthquakes which have torn through the area and destroyed many of the structures. That, paired with ever-changing rulers who would order destruction or give away artifacts to their friends, have resulted in the current state of disrepair. Nevertheless, the grounds were enchanting. Because Lebanon does not have granite, all the stone used for the numerous pillars were brought in from Aswan, Egypt. The detail on these Corinthian-style finishing is spectacular! It was a busy day on the grounds with many tour groups bustling about. I can understand why it’s such a draw! These columns, currently being repaired, each weigh upwards of 300 tons. It is thought that in order to bring in the stone, the workers would put oil and sand on the ground, cover it with beans, and then drag the rocks over them. It makes a lot of sense! Each column has 3 sections which were welded together with a lead and bronze alloy. Below is a cross-section of a tumbled column showing how the reinforcement was created. Genius! Going down a staircase and turning the corner gives a great view of the remaining temple: The temple has intricate carvings around all entryways, signifying that it was once a place of worship. Inside, the detailed work continues:

After a couple hours of walking around and enjoying the fantastic scenery, it was time to depart. On our way out, though, we stopped by the small museum they have set up at the exit. Inside, they had some additional artifacts from the grounds as well as information boards depicting the history and timeline of excavations completed. As it turns out, the excavations began after a visit from Kaiser Wilhelm II in 1898 who expressed an interest in preserving the ruins.

Soon after, we were back on the bus to make our way toward Beirut. We still had one stop to make, however: the Chateau Ksara Winery.

Chateau Ksara is one of the most famous and prosperous wineries in Lebanon, as they were the proprietors of dry wine in the country. It was founded in the mid 1800s by Jesuit Priests who aged their bottles in the caves which now serve as storage for the winery.

We were given a tour of the caves by one of the winery employees and shown the various stages of fermentation that the wines were undergoing.

After the tour we went up to their tasting room to sample the goods. They served us a red, a white, and a rose. I’m no sommelier, but they were all pretty good (not that I could even tell after the first two glasses). Good thing I wasn’t driving back!

After the tasting we made our obligatory trip to the gift shop where we picked up just a small bottle to savor that evening (couldn’t bring any back with us to Cyprus as we carried on our baggage). Then, back to Beirut!

While we don’t normally do this kind of “arranged” tourism, it was a good break from our normal routine. Letting someone else handle all the logistics while feeding us a constant stream of information about the sites was relaxing. On the other hand we had to spend the day with a large crowd of old-timers, most of whom seemed less than interested in the monuments as they were probably on day 100 of their Middle East tour and had seen it all by then. The trip was also more expensive than we would have preferred, but that’s the premium for not having to lift a finger.Despite the downsides, the places we saw on this tour were the best of our trip and I’m glad we took part. If you’re interested in doing the same, here is the link for more information and bookings. Until next time!